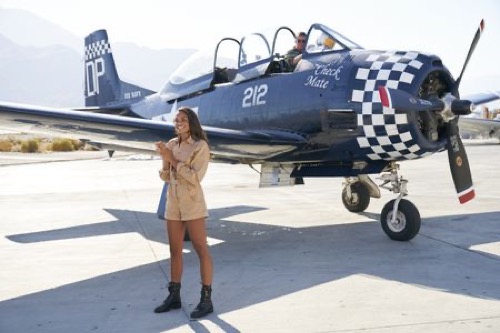 The Bachelorette airs on ABC this evening with an all-new Tuesday, November 2, 2021, episode, and we have your weekly The Bachelorette recap below. In tonight’s season 18 episode 3 as per the ABC synopsis, “With her trust in the men shaken after last week, Michelle and her remaining suitors embark on a week full of dates set on rebuilding those bonds.

First up, stars of the new movie sequel “Top Gun: Maverick,” Glen Powell and Jay Ellis, push the guys out of their comfort zone and into the danger zone, but the G-forces won’t be the only thing making their heads spin. Later, one unsuspecting fella makes the most of his one-on-one time, baring it all in his attempt to woo Michelle. And a group date led by spoken-word poet Rudy Francisco has the men waxing poetic.”

Tonight’s The Bachelorette episode begins with the men feeling bad because in the last episode, Michelle’s character was put into question. Casey believes that as a group they messed up. What is still a big question mark in everyone’s mind is who spoke to Michelle; there is a rat in their midst.

This week there are two group dates and one very intimate one on one date. The first date is for Martin, LT, Olumide, Peter, Will, Nayte, Joe, Rick, Spencer and Clayton, “I want a man that is not afraid of the danger zone.”

The men head over to the Palm Springs Air Museum for their group date, jets are flying all around them. An old school plane lands and Michelle gets out, she looks amazing, the guys are pumped. The garage doors open and two guys get out, one is Glen Powell and the other Jay Ellis they are two stars in the new movie Top Gun Maverik. The two are going to test the men both mentally and physically to see who will put it all on the line. Michelle can only pick one maverick, so that guy is going to get something pretty special.

The guys are going to get suited up and meet back together. The men are giving nicknames, Little Willy, Frosted Tips, Doughboy, and more. They proceed to do pushups. Then they have to do a G4 Simulator and while they are spinning, they have to tell Michelle how they feel about her. Will is seating and turning pale, shaking in his boots. Any sensitive stomachs are not going to make it. Joe actually feels sick watching some of the men do the G4.

Next, the guys are going to compete head to head in a dog fight. All the men are ready to battle. When Will goes against Peter, he absolutely embarrasses him. Glen and Jay pick the overall winner, Will and he gets his own bomber jacket. Clayton is jealous, he knows that he has to step up his game at the afterparty. Will and Michelle take off in the original vintage car from the Top Gun movie.

The date is over, Will is thrilled to have spent the time with Michelle and that he beat Peter, he just hopes that he gets the group date rose. Time for the after party, Clayton spends some time Michelle and he says he was a little upset that she didn’t have to spin today and they all did. He grabs her two hands and they spin around, he starts getting dizzy and they have to stop. Michelle feels lucky to have such a wonderful group of mature men. Meanwhile, Peter and Will get into it, Peter calls Will a bully. Martin is in the middle and he doesn’t think either Peter or Will are going to let this go and he hopes it doesn’t ruin the evening for Michelle.

Back at the hotel, there is another date card and this one is for Rodney, “love is about letting go.” Rodney is thrilled, Mollique doesn’t really see him as a contender, he thinks Michelle is going to keep Rodney in the friend zone.

Peter goes and puts on Will’s bomber jacket and starts fooling around, then throws it in the pool. Peter returns to the other men and says the jacket was dirty and he threw it in the pool. Nayte was laughing but he is taking a couple of steps back, he is disappointed in Peter.

Will returns from talking to Michelle and finds out that Peter threw the jacket in the pool. The other guys tell Will not to sweat it, just sit there and kick it, he will be referred to as the bigger man. Will is broken up, chocked up, he walks away. Clayton asks Peter if he understands that this is going to get back to Michelle. Rick thinks Peter is an idiot. Will returns to the men, Joe is shocked that Will handled it so good, he doesn’t know if he could have.

Michelle returns to the men and gives the group date rose to Martin for pulling her aside during the date to see if she was ok after what happened last week. Michelle and Martin spend some special time dancing together, she says good night to the other men. Little does Michelle know, Will is fishing out his jacket from the pool.

It is time for Rodney’s date, the play a game. Michelle is blindfolded and Rodney feeds her various things. Next, they have to play another game handcuffed. Then they move on to one of them having to strip naked, he really goes for it and says his mom is going to kill him. Rodney runs up the stairs naked while Michelle cheers him on with a megaphone. Tayshia and Kaitlyn pop their head out and so do some of the men.

The two head to sit and talk about their biggest fears. Michelle says that Rodney chipped all day a the friend zone and entered into the relationship zone.

Another group date card arrives for Jamie, Leroy, Chris G., Casey, Mollique, Chris S., Brandon and Roman, “I want a man who can express himself.”

Rodney and Michelle head to dinner, he tells her more about his early years being raised by a single mom, he learned by hard work you can do anything in life, his mom is his hero. He goes on to say that he is looking for his queen and is looking to spending more time with her. They seal it with a kiss. Michelle loves how vulnerable Rodney was during their date. Michelle reaches over and takes the rose, she gives it to Rodney.

Time for the second group date. Michelle tells them that communication is important to her and their date today is about expressing theirselves. The men meet Rudy Francisco, a poet, and he is going to help the men with spoken words. He challenges them to go out and write their own poems, it is their opportunity to be vulnerable in front of Michelle. Jamie doesn’t fall the assignment, he didn’t write a poem, it is odd. Michelle also wrote a poem and she recites it. Rick is moved about how passionate Michelle is about finding love.

Time for the after party, Jamie doesn’t feel any competition with the other men. Michelle tells the men that she was blown away with the men earlier that day. After conversations all around, it is time for Michelle to give out her group rose. She gives it to who she says she connected with and felt safe with, Brandon.

Jamie is upset, he has to compete with Brandon for Michelle’s attention and he can’t believe it. He thinks Michelle is in spring break mode and says it is a turn off.

It is time for the cocktail party, Michelle arrives in a stunning dress. She tells the men that this week she was pleasantly surprised by some of the connections that she made and it only proves what can happen when you put hard work into something.

Michelle goes to speak to the men one by one. When Rick has time with her, he says whoever came to her with the information that her character was being questioned couldn’t be further from the truth. Unless he did it to earn her trust and up himself to put other people under the bus. She tells him it is Jamie who brought the situation to her. Rick says it is tough to swallow. Rick thinks it is sick the level that Jamie went to.

Rick then tells the other men what Jamie did. Brandon says they should confront Jamie head on and get his version. Casey is shocked, he says it is coniviying and manipulating. Jamie tires to defend himself, but Brandon says it is not true, there was nothing going on in the house. Jamie has egg on his face, Nayte can’t believe that Jamie created this whole thing and nothing happened. Jamie is doing a lot of deflecting and slithering at this point.

Michelle is emotionally exhausted, but she is going to try to move on anyway. Michelle returns to the men and they are bickering back and forth. She asks them what the weird vibe is. Jamie tries to defend himself but Michelle reminds him that he said one of his friends saw her walking in Minnesota with a light skinned man, then the whole thing about Joe. Jamie says he felt like he was being preventative. Michelle asks Jamie to go for a talk away from all the men. She tells him that she doesn’t trust him and she thinks it is best if she walks him out.

Michelle moves right into the Rose Ceremony. The roses are given to Joe, Rick, Leroy, Nayte, Casey, Chris G., Chris S., Clayton, Romeo and Will.

Peter gets sent home with three other men. Michelle feels good about the men who are left and hopes she can focus on building relationships.