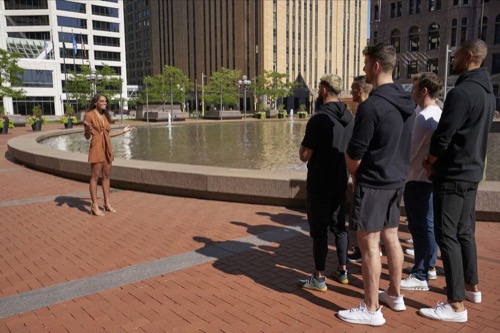 The Bachelorette airs on ABC this evening with an all-new Tuesday, November 16, 2021, episode, and we have your weekly The Bachelorette recap below. In tonight’s season 18 episode 5 as per the ABC synopsis, ““The Bachelorette” is hitting the road! For the first time in almost two years, our leading lady and her men will leave their resort and this time they’ll head somewhere particularly special to Michelle—her hometown of Minneapolis, Minnesota.

The remaining men will attempt to score major points when they take on real Viking challenges to showcase their strength and bravery. It’s a week full of fun and games, but some men seem to have games of their own in mind. Will Michelle show the troublemakers the door?”

Tonight’s episode begins with the men being excited about moving on from the drama and going to Minneapolis. Michelle is happy to be home, her mom and dad are there. She went to school here and teaches here. She thinks there is no better way for the men to get to know her than to be here. She doesn’t intend on settling until she has a relationship that her parents have. She meets with her parents and tell them there are eleven guys left and she feels this is a reset being in her hometown.

Nayte is really hoping that he gets a one on one date this week with Michelle. Clayton feels like he is finally coming out of his shell and also hopes he gets the one-on-one. Michelle meets up with the men and then there is a one on one and it is going to start right now. Michelle chooses Joe for her one on one, she tells the rest of the men to get settled in. Olu is devasted, he thinks Joe has an advantage because he is from Minnesota and he is hoping that he doesn’t return from this date. Meanwhile, Joe feels really good that he was chosen to spend some quality time with Michelle.

Joe and Michelle head to the baseball field where the Twins play and she throws the first ball. Then, it is on to her school and she shows him around. She shows him some trophies that she has won. Joe feels good about their date, he feels it is a good beginning. Next, they go shoot hoops. Joe tells Michelle it is the best date that he has ever been on. She tells him that he reminds her of her dad.

Meanwhile, the men are pretty depressed that Joe got the one-on-one date. Olu says if he doesn’t get the other one he thinks he is going to be done. A date card arrives, Casey, Rodney, Martin, Leroy, Rick, Clayton, Olu Chris, Brendon – “meet me at the stadium.” This means Nayte got the other one on one date.

Michelle and Joe head to dinner, he tells her about an injury to his foot that caused him a lot of anxiety and depression, it was a tough time for him. She tells him that she knows what it is like to be at rock bottom. She tells him that their date has been so special, she loved it. She loved seeing another side to Joe and she thanks him for trusting her. She gives him the rose.

Time for the group date, the men meet Michelle at the stadium – they are so excited to spend time with her. She tells them that the day is going to be extra special, outcomes these guys that look like Vikings from way back. Michelle tells the men she needs a man with bravery and heart. The Vikings say they are going to turn the men into true Vikings. Michelle thinks this is going to be a real telling group date. Today the men are kissing and hugging Michelle a lot. Olu is looking at Chris and he can’t stand him, he wants to wipe that smirk off his face.

The men head into the lockers and get changed into costumes. Before the battle they must have sustenance; fermented herring, Viking head hash (cow brains, tongue, and cheek). Chris says he doesn’t think he can do this, it is disgusting, and asks if he is going to die. The rest of the men are making a good effort. The first battle is Chris vs. Olu and he says he is going to forfeit, Michelle says no. They do some arm wrestling and Olu kills it. Michele is having a lot of fun and she is happy that the men are interacting with her. The Vikings say there can be only one ultimate Viking, and that is Clayton.

At the after-party, Clayton is the first to spend time with Michelle, he says it was a real good time. She tells him that he was at the forefront of her mind going into the date and she is happy that he came out of his shell. He asks her if she has always been so confident. She says she has always been confident, her dad models it a lot. He says his parents are the same way and are really important to him. He feels chemistry with her. He finds her passion, intelligence, and beauty. Brandon interrupts them, she tells him that she saw his effort over everyone. She got something for him, Nordic fish, but they are gummies and he says he will take it and kisses her. He tells her that she makes him feel so good.

Nayte gets his date card, “I’m looking for a man who wants to test the waters,” and is looking forward to spending more time with Michelle. Meanwhile, Chris is acting weird, he is a little bit off, unsettled and he hopes it doesn’t derail Michelle. Chris feels that Nayte got the one-on-one that he deserved. It’s almost like Chris expects Michelle to search him out instead of him searching for her to chat with.

Michelle returns to all of the men and tells them that she is going to wrap up the evening, She picks up the rose and says there is one person that connected with her on this day and she is giving the rose to him, Clayton. Chris is in shock.

Michelle is on her date with Nayte and tells him it is going to become a group date, two of her girlfriends join them on a boat. They ask Nayte if there are people there for the wrong reasons. He doesn’t really answer, he says Michelle is a good judge of character and she will send home anyone who I there for the wrong reasons. Her friends really like Nayte and see the connection between the two. At the end of the boating ride, Nayte and Michelle jump in the water. Back at the condo, Chris says that Michelle’s infatuation with Nayte is overshadowing everything else. He feels like everything he said to her landed on dear ears. He has a lot to say to her and plans on doing it before the Rose Ceremony.

During dinner, Michelle and Nayte talk about relationships and she says she was in one for three years and it went really bad. Nobody was checking in on her and she ended up moving back in with her parents, she ended up getting very sick, and it was all because of the toxic relationship that she was in. She tells Nayte that this day was one of her favorite. Little does Michelle know, Chris is on his way to interrupt her date. Michelle looks over her shoulder and sees Chris, she asks her if she can speak to her for a moment, both she and Nayte are shocked.

Michelle and Chris go outside, he tells her that he feels insecure being there and disappointed that he didn’t get a chance to speak to her. In fact, he feels played, and what he said fell on deaf ears. He warned her and he doesn’t want her to make the wrong decision. Meanwhile, Nayte is not happy, he is watching from inside. She tells Chris that she kind of felt off guard when he spoke at the cocktail party.

Walking into the group date, she says he didn’t have a good attitude, he says he felt foolish. She says she appreciates him speaking for her, but she can speak for herself and that makes her empowered. And, with that, she tells him that she is going to walk him out. She thinks Chris is coming from a genuine place of concern, but he doesn’t get to control her journey. At this point, if she gets heartbroken, that’s on her, she knows what she wants and what she doesn’t want. She picks up the roses and she gives them to Nayte and tells him she is very capable of making her own decisions.

At the cocktail party, Michelle tells the men that Chris is gone home, she felt he wasn’t her person and she is excited about the ten that are left.

Martin spends time alone with Michelle and tries to open up, but he ends up rubbing her the wrong way. He doesn’t think he said anything wrong, he thinks there was a miscommunication on her end. He said that a lot of women are high maintenance and he came on the show because he felt she was not.