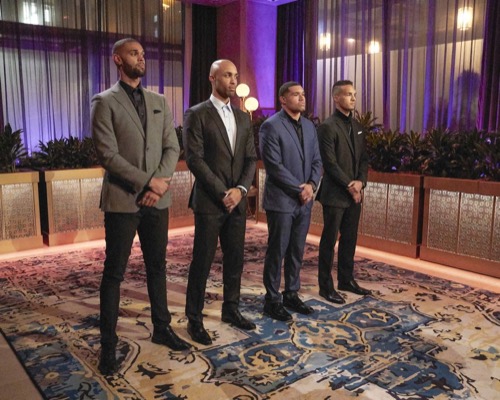 The Bachelorette airs on ABC this evening with an all-new Tuesday, November 30, 2021, episode, and we have your weekly The Bachelorette recap below. In tonight’s season 18 episode 7 as per the ABC synopsis, “It’s hometowns week! In a fun twist this season, Michelle’s final four men are bringing their families to her in Minneapolis, Minnesota! Designed to show off some of the guys’ own hometown stories, their dates are filled with skateboarding, apple-picking, a romantic prom and even a confession of falling in love.

With so much at stake and so little time left, Michelle knows that tonight’s breakup will be the most difficult of the journey so far, and after seeing some red flags, she begins to wonder if all of her men are ready for love. Just in time, Michelle gets a special visit from two of her best friends, Bri and Serena P., who come to her emotional rescue, helping her navigate the ultimate question—did meeting their families change everything?”

It’s the Hometowns week! Michelle got to meet her suitors’ families and up first was Brandon. Brandon’s parents and his brother Noah flew out to meet with Michelle. This was very big for Brandon because his brother was supposed to have joined the Navy and so any time he gets with his brother is amazing. He was also glad to introduce Noah to Michelle. Brandon has met Michelle’s family and the next step if there is to be a future for them is for her to meet Brandon’s loved ones. Brandon and Michelle’s relationship has been going strong. She jumped into his arms when she saw him and the two couldn’t help themselves. They were kissing. They were holding hands. They were serious about each other and that’s what Brandon wanted his parents to see.

Before she met everyone, Brandon and Michelle had one more date at the skateboard park. Brandon loves skateboarding. He started doing it when he was young and his family soon joined in as a way to stay close to him. But, and this is a big but, Brandon’s nerves around Michelle caused him to make a few beginner’s mistakes on his board. He wiped out a couple of times before he was able to conquer said nerves and then he was able to show Michelle how to do it as well. They had fun. It confirmed to Michelle that she could fall in love with him and so she wasn’t worried about meeting his family. She went into the meeting feeling good. And it didn’t hurt that his family were very welcoming.

Brandon’s brother Noah also got real with her. He pulled her aside to tell her his brother deserves the world and he more or less asked her not to hurt his brother. He also asked what sets Brandon apart from the other men she’s talking to. Michelle mentioned all of Brandon’s great qualities. He was even great with her family and she loves how much Brandon is committed to her. She just doesn’t know if that was going to be enough. Michelle did later admit to Brandon after speaking to his family that she’s falling in love with him, but this isn’t a regular dating show and that could literally mean anything with this couple because they always say they think they’re falling in love or that they actually falling in love and then they send that person home the very next day.

Next up was Rodney. Rodney instantly made an impression when he introduced himself in costume and since then he and Michelle have connected on many different things. They get along great. She enjoys his sense of humor. Michelle also enjoys kissing him and so their date before the big family meet was essential. Michelle could picture a future with him. She went to the apple orchard with him and thy picked apples. They also went apple tasting. Michelle enjoyed herself. She also told Rodney that he does make her happy and, that while she loves it when he’s his happy-go-lucky self, she also doesn’t mind his serious side. Rodney was more than just the guy in the apple costume. And meeting his family helped complete the picture.

Rodney’s family has done an amazing job raising him. Michelle said so before she even met his parents and so meeting his parents was a treat. It was Rodney’s mother who asked Michelle if the relationship she has with her son could last in the real world. Michelle thinks it could. She said as much and she came across as genuine and sweet. Rodney’s father liked her, but his mother remained hesitate about Michelle and so she warned Rodney to be careful. He was dating the same woman as three other men. His mother was worried he’d get hurt at the end of this and she didn’t want to see that happen. His mother is a strong person. Rodney gets his strength from her and its where he got the courage to tell Michelle he’s falling in love with her.

Rodney said the words. Michelle didn’t say them back. Michelle could envision a future with him because she laughs with him like she doesn’t with anyone else and so her not saying the word back didn’t mean she was signing off on the relationship. It merely met she wasn’t at the stage yet. Still, the two enjoyed themselves with Rodney’s family and later Michelle went on a date with Joe. Joe doesn’t have an easy time sharing things because he likes to play it close to his chest and so its been adjustment to get him to be vulnerable with Michelle. She put in the work. She got him to open up bit by bit and she was able to do so because Joe is a lot like the men in her own family. They were reserved but that didn’t mean they didn’t care. It more meant they care too much.

Rodney perhaps arranged one of the most thoughtful dates for Michelle tonight. He brought her back to his old school where he was holding a prom just for the two of them. Michelle has mentioned how much it hurts when she wasn’t named prom queen and so he finally gave her the chance to get the crown. She loved her prom. The prom made her happy. She also loved how he remembered that conversation and worked on it from there. Joe didn’t just dismiss things. He listens. He smiles when he’s near her. He lets down his guard and his family were worried about him getting hurt. All of the families were worried about the process on the show because they didn’t want their loved one falling in love with a woman who sees a future with someone else.

But here’s thing, Michelle couldn’t guarantee anything because she’s confused. She doesn’t know what she wants at this point and she has in turn tried getting serious with everyone instead of the one special someone. Nayte was next. He and Michelle have been getting along. He was also reserved and she was doing her best to break through his shell but his family wasn’t too sure if they wanted him to let down his guard. Charles for one didn’t want Nayte to get in over his head. He reminded his son that currently this all just an experiment and that he should be looking for love rather than anything else. Nayte had a heart to hear with his family. He told them he loves them and he doesn’t tend to tell them that. And so that was very sweet of him.

Michelle came away from the family meeting being the most unsure about Nayte. She suspects he wasn’t ready for an engagement and she knows that’s what she wants. She wants to get engaged. She didn’t want to have get engaged more than once. She wants to get married. Michelle has a connection with each of the guys. She could see them in her life and then her mind goes back to the family meetings. Some of her thought was confirmed by the family and the family also raised doubts. The only thing Michelle knew for sure is that she didn’t think Nayte was in a place to get engaged. Michelle met up with two of her friends. They talked it out and she said either way tonight was going to be a tough night.

And in spite of her misgivings, Michelle chose to give Nayte a rose and she eliminated Rodney.