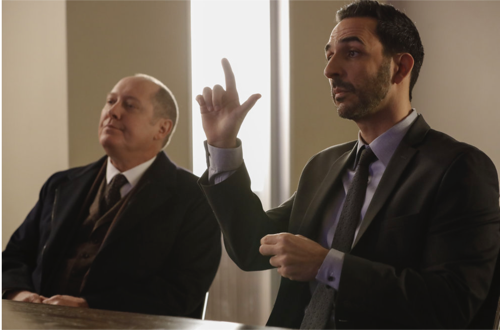 Tonight on NBC their hit drama The Blacklist starring James Spader airs with an all-new Friday, February 12, 2021, episode and we have your The Blacklist recap below. On tonight’s The Blacklist Season 8 episode 6 called, “The Wellstone Agency”,  as per the NBC synopsis, “Red and Dembe go to great lengths to fulfill the final wishes of a dear friend. Aram goes undercover as an interpreter to a company that provides services to criminals, while Park helps a friend in trouble.”

Red calls Park to meet with her, Dembe is there as well. He asks her what she knows the Nirmburgh trials. She says military tribunals after WW2, allied forces prosecuting Nazi leadership for war crimes. Red says they gave the devil his day in court and invented simultaneous translation to do it. If it weren’t for the allies, the desire to give Gheuring a fair trial, the Wellstone Agency might not exist, well it doesn’t officially exist and yet its services have made thousands of illicit business transactions possible. She says it is a translation service for crooks. Red believes that Keen recently acquired Wellstone’s services, if they find the interpreter she used, they find her. He says his contact with Wellstone recently fell out, and that is why he needs her. He tells her, the Wellstone Agency, it is the next name on the Blacklist.

Park updates the task force. Cooper decides that Aram is going in, he tells Park to advise Red to arrange a meeting with his contact. Cooper then gives a flash drive to Aram and tells him that he needs him to open it and doesn’t want him to say anything to anyone.

Red gets a call from Paula, Glen’s mother, and heads over there with Dembe. She tells Red that Glen is dead from west Nile virus. Dembe gives his condolences, she calls him Bill. Paula says Glen died two weeks ago. She found an envelope that reads “for Steven Homan, in the event of my death,” and gives it to Red who can’t believe that this is happening. She says she is having a party for him tomorrow at the DMV and wants them to be there.

Park is in the hospital, she is there to see Melissa. Her co-worker Jenna is there and she tells Park that there was a fire in the kitchen and Melissa was lucky to get out, the smoke alarm didn’t work. The doctor’s are prepping for surgery and they don’t know if she will be alright. Jenna tells her last year they fell behind in the restaurant, the banks wouldn’t touch them so they borrowed from a loan shark. This month this was the fourth month they missed a payment. Park asks for the guy’s name and says she is taking care of this. Park goes after the guy who picked up the envelope, she arrests the man.

Red is upset, he says to Dembe, all the things he did for Glen, all the attention, all the time spent and suffering his antics, the money and that ridiculous sports car; he told everyone he was Huey Lewis’ muse and that is where he got all the money. Red says it is like he is reaching out from the grave to torment him. Dembe says he needs to convince Huey to come to his funeral, it was his dying wish. Also, Glen wants his ashes tossed at the statue of liberty, he doesn’t want to sit on his mother’s mantle.

Red says he is not doing any of it, Dembe smiles and says he has to do it. Dembe tells him they have to do this for Glen, Red gives in but says he is not breaking into the statue of liberty to spread Glen’s ashes.

Aram meets with Red’s contact, Radley Jorgensen who tells him that stealing from Wellstone is a bad idea, but he promised Red to vouch for him and get him into the company. He says he is not his friend and he thinks this is a suicide mission. The man tells Aram that these people won’t hesitate to kill both him if they deem them a liability. Aram gets in, they start with a polygraph, an aptitude test, language test, amongst others.

Cooper calls in Park, Melissa passed away from her injuries, he says he is sorry. And, Mason Dieterle made bail on loan shark charge, he is back on the street. He tells her to do nothing about it and asks for her word, she gives it to him.

Red is with Huey Lewis, he says he only agreed because his manager insisted. Red explains that a dear friend passed away, pillar of his community and he absolutely cherished Huey and he realizes it is a bit of a long shot but he was wondering if he would consider attending his memorial service, this evening at the DMV where he was general manager. Red says he wanted to impress his mother, and he thinks he inspired him to write “working for a living.” Huey asks if this is a joke, Red tells him to name his price and he will owe him a favor. Huey asks him to leave, he has an interview across town in an hour and he doesn’t want to be late.

Aram looks stressed at Wellstone, he is left in a room alone and tries to copy some data on a flash drive, but he is caught. Aram thinks fast, he says he spilled his soda, and noticed profiles on the laptop that he was left in, it was lazy and unprofessional. She tells him that he passed with flying colors and if he will have them, they would like to have him at Wellstone. Aram then calls Red and tells him that Liz’s interpreter was Alexander Frayne he works in DC, Cooper is also on the phone. Red calls Frayne and tells him that he can offer him a way out. Frayne gets out and meets with Red, he tells him that interpreted a meeting with Liz and he wants to know who she met and what they talked about. Frayne says he doesn’t know who he was. She paid 700 thousand and he doesn’t know the name. Red tells him to call his contact at Wellstone.

Jenna sends a text to Park, “They were here! Said they’d come back tonight!” Park calls Jenna on her way out, she calls Jenna and tells her nothing is going to happen to her. Park goes to see Dieterle, she beats him up really bad.

Jorgensen calls Aram in a panic, he asks him what he did, Wellstone knows there is a mole. Aram is brought into a room with the colonel, the man who runs Wellstone, and he is deaf. Red is there, he tells the colonel that he has a mole and can help him. Red says he knows who the mole is, and he wants him first to delete his file. Red asks for the name of the person who Liz met with. The colonel looks at his computer, then writes down a name and gives it to Red. The colonel pulls out a gun, he wants to know the name of the mole or he is going to kill Aram. Red says the leaks predate his new interpreter and they need to go now.

Red helped the colonel escape, the rest of Wellstone execs and employees are caught by the FBI.

Cooper tells Park that Dieterle is missing and wants to know if she broke her promise she says no, but she is lying. After beating him up, she called Red and Dembe to clean things up and get rid of him.

Time for the party at the DMV, Huey Lewis shows up after all and compliments Glen’s mother on how lovely she is. Huey takes the mic and says some wonderful things about Glen and says he was the one who gave him the inspiration to write one of his songs. Red is so surprised. Huey says Glen was his muse and he loved him. Red sees the urn with Glen in it, he takes it, replaces the ashes and Huey catches him. Huey asks him why Glen was so special that he did this for him. Huey says Red told him he could ask for a favor, Huey wants to know why he liked Glen so much. Dembe walks in with the ashes of a great dane, Red does the trade and tells Huey he will explain on the way.

At the statue of liberty, Red, Dembe, and Huey are there with Glen’s ashes. Red says he was so many different things, a son, civil servant, proud member of a bowling team, a two-time runner-up at the regionals, and a great tracker. But he was a lot more than that, he was infuriating, so maddening, a liar and a cheat, but there was one thing he was not, afraid. He wasn’t afraid of anything, any kind of danger and he wasn’t afraid of Red. No, how hard life was to Glen, he loved it back without reservation or remorse, or regret and that is rare. Red wishes more people were unafraid like Glen, it is the thing he will miss about him the most. And he hopes it is a long time before his memories of him start to fade. Red opens the bag and he lets the ashes go in the water off the statue of liberty. Dembe puts his arm around Red.