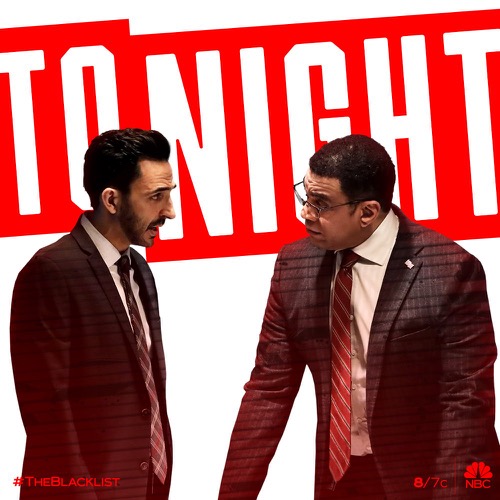 Tonight on NBC their hit drama The Blacklist starring James Spader airs with an all-new Friday, March 26, 2021, episode and we have your The Blacklist recap below. On tonight’s The Blacklist Season 8, Episode 11 called, “Captain Kidd”,  as per the NBC synopsis, “The Task Force attempts to stop an abduction by searching for a “treasure man” who uses geocaching to hide illicit goods and facilitate transactions between otherwise warring criminal factions.”

In tonight’s The Blacklist episode begins with a young boy reading to a group of other boys, he talks about an old man, he watched him sleep, then killed him, cut off his arms, his head. The boys are all sitting around a candle, that is placed on top of a skeleton’s head. One boy is another part of the house and in the dark – it seems to be some kind of initiation. All of a sudden, the boy in the dark starts shouting in distress, when the other boys go find him, he is laying on the stairs and foam is coming out of his mouth.

Aram tells Harold that he has four leads that could be Rakitin – Harold tells him that he wants eyes on all of them.

Then we see Red, Dembe, and Harold sitting at a table and talking about Captain Kid, Red says he is the only pirate who actually buried his treasure along with East Hampton. Red is referring to a child’s overdose, a boy landed in the hospital after a mysterious Fentanyl overdose. Red thinks that the boy could have thought the white powder was simply dust, which brings Red to his next Blacklister, Captain Kid who is a glorified middleman who facilitates transactions by guaranteeing, payment, pickup, and delivery between criminals and their buyers.

He takes possession of items for sale, hides it, and gives it to the buyer when it is paid for. He also hides people and Red thinks he is going to hide Safiya Maroun, in 2006 she was committed to a mental institution for denying her male guardian’s wishes. Later that year she was given asylum in America and now she is one of the most prominent opponents of Saudi Arabia’s oppression. She is a target of Neville Townsend; he is contracted to abduct her. According to Red, she will be buried alive until Saudi’s secret service pays Townsend.

Aram tells Ressler that Park is hunting down Rakitin, Red is a traitor, Keen is partnered with a man who abducts human rights activists and they are hunting for a pirate that buries people alive. Aram says that sometimes, he thinks he should never have left the circus.

Aram and Ressler are at Safiya’s house, she has been abducted, and then we see by whom, Captain Kid.

Cooper tells Aram that they have found the grey SUV that abducted Safiya. Aram says he contacted Cyber Crime, to find anyone that will give them information about Captain Kid. Aram bought illegal drugs online, but on the upside, one person met him near a taco truck. All but one, he either picked up the drugs or had them delivered to him. One texted him, coordinates, photos, and directions of where the drugs would be dropped, a digital dark spot. Cooper hopes that Aram’s shopping spree leads them to Captain Kid.

We see Park, she is walking down the street and following a man who was to meet with Red, he figured it out and cancels with Red, then loses her.

Ressler and Aram go to the drop-off location, there is nothing there. Ressler notices that there are cabs across the street, and there is probably a camera in it. The dashcam caught the drop, but that is it. Cooper notices that the person was holding a coffee cup, he zooms in on the cup and finds the name of the café.

The task force finds Jarret Moore, the boy who was holding the cup. He says he steals from Captain Kid, he doesn’t work for him. He tells them that Captain Kids use droppers to drop his stash, he doesn’t know how many. Ressler wants all his contraband, and if that helps him find Captain Kid, he will keep him out of jail.

Ressler finds out the contraband he got from Moore contained powdered milk, and someone is tampering with the drugs in lockup, heroin went in, baking soda came out. The only person to touch the dugs is the drug lab chemist for the city, Tyler Schwartz.

Andrew meets with Red; he is nervous that Park was following and believes the FBI is after him. Red tells him to stand back, he will handle it. Andrew is nervous, Red tells him to keep his mouth shut and make sure the situation in Moscow is taken care of.

Ressler meets with Tyler Schwartz; he says he is waiting for his lawyer. Ressler tells him that he is on to him and if he helps them, they will go easier on him. Tyler says it is not just him, it is Williams. Tyler says his facility handles hundreds of samples every week. They are stealing and re-selling drug evidence. Ressler tells him that he knows he is using Captain Kidd and he will help him find him if he wants to help himself.

Aram tells Cooper that he heard from Park, she was following Andrew Patterson, one of the Rakitin suspects and she thinks he is the one they are looking for, Red’s source. He gave her the slip near Red’s restaurant.

Ressler has Captain Kid in custody, he is questioning him with Cooper. Ressler asks him where Safiya Maroun is, Kid, says he doesn’t know. Ressler then mentions the thirteen-year-old in the ICU from a Fentanyl overdose that he stashed in that house. Cooper tells him there is no deal, a woman’s life is in the balance. Kid tells Cooper that her blood will be on his hands then, Cooper says he can live with that if he spends the rest of his life in prison.

Outside the room, Cooper tells Ressler to get the scumbag to talk, but he is not giving him a deal. Red shows up, he tells Cooper that he wants a moment with Kid to try to get him to tell them Safiya’s whereabouts. Cooper tells Red that they know about Andrew. Red tells him not to do this, as a friend, not an advisory. Red says he is not a traitor to the country. Red tells him as his friend and colleague, he is imploring him to let this go.

Cooper changes his mind, he tells Ressler to make a deal. They need to get to Keen before Red and since Captain Kid works for Townsend, he can get them to Keen. Ressler speaks to Kid, he says no way, he is not snitching on Townsend and nobody can protect him if he double-crosses him.

Captain Kid gives up the location of where Safiya is, but he doubts they can get there in time. She is on oxygen, but only about an hour left. So if somebody doesn’t get to her, she is going to die.

Safiya is unburied, but not by the FBI. The Saudi royals men get her to kneel down on a plastic mat, when one of them leans towards her, she has a shaving of wood from the box she was trapped in and she attacks. Guns go off, the task team are within hearing distance and rushes in. Safiya is rescued and brought in. Cooper tells Ressler to get back in and speak to Kid, he is in a safe house, they only got Safiya, which is only half of the deal. Meanwhile, at the safe house, Townsend gets there before Ressler.

Ressler arrives at the safe house and finds a mess, he calls Aram who then goes to see Cooper and tells him two agents are dead and Kid is gone.

Dembe tells Red that he has to call a truce with Harold, the only one that wins here is Townsend, he has Kidd and neither he or Harold are closer to Keen.

In Moscow, Andrew gets a list of names to execute, one of them is Harold Cooper.