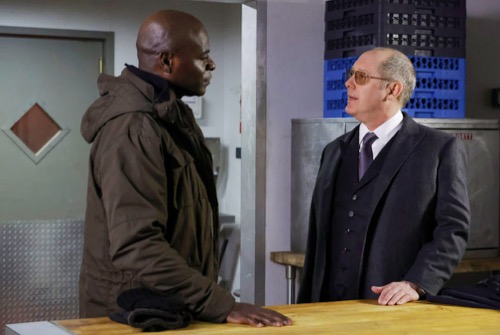 Tonight on NBC their hit drama The Blacklist starring James Spader airs with an all-new Friday, April 23, 2021, episode and we have your The Blacklist recap below. On tonight’s The Blacklist Season 8, Episode 14 called, “Misere”,  as per the NBC synopsis, “In a retrospective look at key turning points, steps are retraced that lead Elizabeth Keen to align with a powerful enemy.”

In tonight’s episode of The Blacklist, Skip Hadley and Liz are in a plane, talking about extracting drive from Reddington’s safety deposit box. Liz says once the drive is retrieved, she wants it delivered to Cooper. If the intel on that drive can prove that Reddington is N13, she believes Cooper should know.

He tells her that 72 hours ago she was an FBI agent, now she is running from the very people she used to work for, he wants to know what exactly the plan is. She says, her mother spent almost thirty years running from Neville Townsend, the only way she survived is through a network of resources that Mr. French helped her build. He was her guardian angel. She found his contact information in her personal effects, he says he can help. She is starting with one of the men her mother trusted the most.

Skip and Liz are at Mr. French’s apartment, he is not answering his phone, her daughter is in the backseat. All of sudden, a woman knocks on the car window and says something has happened, follow her. The woman says, two days ago, Phillip went to Stockholm on business, he said he would be two days; he never returned. Two days later he called her, said he was in Washington and it wasn’t safe for her in the house.

She says her husband was a recruiter for a data management firm, but that was a lie. Liz thinks Red is behind this, he is not happy with killing her mother, he doesn’t want her to have access to any of her resources. Liz leaves her number, she tells Mrs. French that she is leaving to find her husband and do everything in her power to keep her safe. She offers for them to stay there, she has plenty of room – Liz agrees.

While sleeping, Liz thinks Kaplan is in the room with her and tells her she is a smart woman, which is why this next part will be so painful, but if she learned anything from her mistakes, it is that she can’t show weakness, she has to fight like Reddington, be every bit as fierce and cross whatever line it takes – she knows what she has to do, the enemy of her enemy, is her friend. Liz wakes up, she wakes up Skip and tells him that she knows what they are going to do. They are going to take down Reddington with the man he hates the most.

Skip tells Liz this is insane, Neville Townsend spent thirty years hunting her mother and now she wants to be his partner. She says they have a common enemy. He says even if he agreed to do this, how do they find him. She says, his sister is still alive, Mary Bremmer, and she thinks she will lead them to Neville.

They can recruit her with the help of criminals and before they approach her, they need a network in place. Liz comes up with an idea, put Bremmer’s life in danger, save her, and she will be indebted to her. She is getting “The Freelancer” out of jail in exchange he goes after Bremmer. She is going to make sure this works out, and Bremmer goes back to jail. And when she saves Bremmer, she hopes she will be ready to make an introduction to her brother.

Kaplan tells Liz that she has to do this, Reddington would consider this a business transaction and she knows what is going to happen if she doesn’t see this through – if she has any hope of un-sitting Reddington, she is going to have to become just as ruthless, and the woman is no angel, she brokers chemical weapons. And that is how Neville’s sister died.

Liz calls Neville and tells him it is done, he tells her good work and she has found herself a partner in crime.

Liz goes to see Neville, she tells him that Reddington is N13 and he killed her mother. He says they need to prove it and ask questions about the archive, there are things he needs to understand. She asks him what Reddington did to him. Neville talks about when his family was murdered, he was asleep through most of it. He watched his son takes his last breath, their mother was made to watch everything, and then he was made to watch her die.

He spent thirty years believing the documents that her mother stole started the fire that burned his life to the ground. If Reddington is N13, he needs him to confirm it and he needs to know what he intends on doing with the archive. He needs his end game, why his family had to die. She says he won’t talk, and he is not afraid to die. Neville says they lure him in, talk and then kill him.

Liz has an idea, speak to a friend of Reddington who can lure him in, his name is Max. Liz meets with him first and he says no way, he will not betray Red. Then Neville and his henchmen come into the room, one he calls a doctor and starts to inflict torture on the guy.

Afterward, we see Max speaking to Reddington and Dembe, he is missing a pinky and his hand is damaged. Liz is in her car, she imagines Kaplan being there and says she is crossing lines that she is no longer comfortable with. Kaplan tells her the scar on her hand is not only part of her past, it is the key to her future. All of a sudden, bullets start flying everywhere. They have Dembe, Liz wants to stop it and Kaplan tells her it is nothing but a transaction.

Liz is with Neville, he shows her a new subject, the man who surrendered himself, Red, and Dembe escaped. Red is laying on a table, he is tied down and the doctor is with him.

Reddington gets away, Liz tells off Neville because he had a chance to put a bullet in him and he didn’t.

Ressler calls Liz and tells her that if Red is N13 they have a good chance of proving it and then she can come home. He asks her to meet him at the park at midnight, she can trust him.

Ressler is in the park, he calls Liz, but Kaplan tells her not to pick it up.

Liz feels responsible for Mary Bremmer’s murder, Dembe’s torture and it is just another reminder that no matter how tight the noose Reddington will always cheat the hangman. Mrs. French says she heard from the police, they say her husband is dead and died from natural causes. Liz says she is so sorry. She tells him that he was a good man, she doesn’t need sympathy, she needs justice and she is the one who can get it for her. Liz tells her that she doesn’t know who they are dealing with.

Liz goes to see Dembe’s daughter, Isabella. Liz tells her that her father needs protection from Reddington, the bureau believes that Reddington may be a Russian asset. She doesn’t have proof, but she is there because she can help her get it. Liz wants her to call her father, tell him that she wants to meet him, and plant a listening device. With any luck, they can figure out what Reddington is up to.

The listening device is planted and Liz can hear Red’s conversations with Dembe – Liz now knows how she can get to Reddington. We see Anne, she backs up her car and Liz makes sure that she smashes right into her vehicle. They exchange ID, Liz gets her address and cell phone number.

It’s late evening, Liz, acting as Cindy, the woman who Anne hit with her car, shows up with a cake. Liz is gone, and Red shows up with flowers, Liz is listening in. This is where Neville gets the power and phone lines cut. Red sees a van outside and suspects something, so he tells Anne to go into town to get them a sandwich and he will be ready when she gets back. Red makes it to town, takes Anne into the police station, and hides out there.

Liz tells Neville that they need to call this off, Reddington knows. Neville says no, they are going to do this anyone. Liz says they can’t attack a police station, she is worried that innocent people will get killed.

Liz is on the phone with Neville, she tells him that six people are already dead and for what, nothing, he is gone. Kaplan tells Liz that she knows how Red got away because she would have done the same thing.

Then, we see Anne at home, Cindy comes in and asks her if she is ok, the whole town is talking about her. Anne says she has this friend, he is kind to her, but people are saying horrible things about him. Red is in the car, driving away, and thinking about Anne, he turns around. Anne asks Cindy if she can stay at her cabin, she will be safe there, she says yes, but after she tells her where Reddington is and she pulls her gun out.

Anne says she is one of them, Kaplan says yes and Liz says no. Then we see Reddington, he walks into Anne’s cabin and there is Liz with a gun pointed at Anne. Red tells her to let Anne go, she doesn’t have to be here for this. There is a struggle, Anne falls to the floor and so does Liz but she gets her gun back quickly. Red runs to Anne’s side and calls 911. Liz has her gun pointed at Reddington and Kaplan tells her to shoot him, he wouldn’t hesitate. Kaplan tells her to pull the trigger, she can’t get her life back until she does. Reddington is leaning over Anne’s body and trying to soothe her until the ambulance arrives.