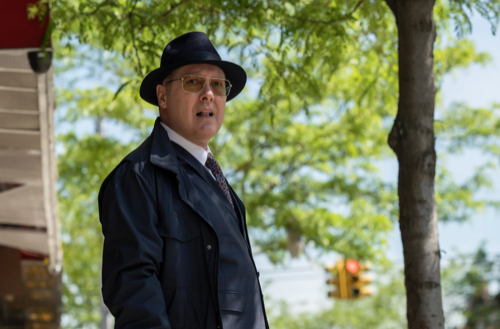 Tonight on NBC their hit drama The Blacklist starring James Spader airs with an all-new Friday, June 4, 2021, episode and we have your The Blacklist recap below. On tonight’s The Blacklist Season 8, Episode 20 called, “Godwin Page”,  as per the NBC synopsis, “Liz, Red, and Dembe are forced to work together to survive an attack from Townsend. Cooper and the Task Force attempt to de-escalate the increasing danger to all.”

In tonight’s The Blacklist episode, the episode begins with Neville Townsend, he and his men are all geared up with assault rifles, they are outside of Bino’s place where Dembe, Raymond Reddington, and Elizabeth Keen are held up. Townsend knocks on the door and shouts to Bino, tells him that they had a deal. Dembe tells Red that they are covering all the exits. They are going in. Liz and Red start arguing about who is helping who and Dembe tells them, why not we just try and help each other.

Townsend makes it inside, a couple of his men are dead, he shouts to the others, “find them.” Meanwhile, Red, Dembe, and Liz are out, they managed to get out of a secret area. They walk through a tunnel and end up in a store, Liz sees a cop outside, she sneaks out and tells the cop there is a man inside with a hat on, she thinks he has a gun. Liz walks away down the street, the cop goes inside, he pulls a gun on Red, but Dembe pulls one on the cop. Too late though, Liz has gotten away.

The task force is with Ressler, a bullet destroyed part of his right lung, there is also an infection. Cooper tells Aram and Park about the shootout.

Vandyke is with Godwin Page, he tells him the FBI saw him, they have to take precautions, Townsend wants to keep him safe. He gives him a fake passport, cell phone, money, and a gun. Vandyke tells Godwin that he is going to find Keen and when he does, he is going to make sure that Reddington watches her die.

Liz secretly meets with Cooper, he tells her this is the end, too many lives have been affected. She asks if Ressler is going to be ok, he says he doesn’t know. He tells her to let him help her. Red’s way, the renegade way will just spill more blood. She says hypothetically if she turns herself in, how can he keep her safe. He says not how, where.

Liz turns herself in, meanwhile, Red leaves Cooper a message that they have a problem; Dembe and he were able to avoid Liz being handed over to Townsend but she is in the wind. Cooper picks up, he tells him that Liz surrendered, her idea, not his. He tells Red that she can’t keep running, they will have her under 24-hour guard. Cooper says the decision has been made, there is nothing to do at this point.

Godwin is driven to the farm, he and the driver get out – they go into a barn and Red and his men are there. The driver is actually on Red’s payroll and Townsend doesn’t know. Red tells him that he wants to kill Townsend and he needs him to do it. Godwin says he won’t help. Edna arrives, and she has gadgets, sharp ones, and she means to get Red his information from Godwin.

Aram goes to see Liz, she is now secured in a box. She tells him that she is not ashamed of what she has done, anyone would have done the same in her place. He tells her that Ressler is awake. She says she is entitled to a phone call, he tells her they are past that. She asks please, for Liz, his friend.

Cynthia Panabaker drops by to see Cooper, he wants her to cut a deal with Liz but she won’t. She tells Cooper that Liz deserves to spend the rest of her life in prison for what she did.

Liz asks Aram if he vetted the security around her, she is worried that Townsend could have men inside. Aram gives Liz one call, he calls Ressler. He tells her that he didn’t think they would end up like this. She says this is how it has to be. All of a sudden, an alarm starts going off, there is a chopper over the building, Liz is freaking out. Cooper calls a code black.

The chopper drops down men and they set off an explosion, concrete, and waterfall all over the secured glass box that Liz is in, she shouts at Aram to get out of there. Smoke bombs go off, men descend from the roof and they are cutting into the box. Hooks and chains are attached to the box, Liz is lifted in the air, they took Liz and the box.

The masks made facial recognition impossible and there was no tail number on the chopper that yanked out Keen, which Aram says is badass. Cooper tells Aram that they need to get Liz back.

Red is sitting with Teddy, he is the one that brought Edna to the farm and he says she is so skillful with a knife that she could have worked at Benny Hanna. All of a sudden, Liz walks in, it was Red that stole her away. Edna tells Red that she inserted a tracking device inside Godwin’s neck, he is going to lead Red to Townsend. Red tells her that she is a lifesaver. Red tells Liz that he broke her out to save her from spending the rest of her days in a supermax. Red locks Liz inside of one of the horses’ stalls, he tells her that he hopes she will consider herself as a guest more than a prisoner. Little does Red know, Liz grabbed a knife out of Edna’s bag and she was leaving with Teddy.

Panabaker finds out that Liz is gone and she is furious, Cooper tells her that she was extracted and they believe it was Townsend, he is the only one that has the means. Panabaker says it could be him, he wanted to cut a deal. She says that she thinks Red did this, it has his paw prints all over it, but she thinks Red spoke to him first. She gives Cooper 24 hours to get Red there, she tells him that he is their CI and at the very least, he could lie to her face.

Liz is in a stall beside Godwin, she tells him that she can help him get out of there if he will broker a deal for her with Townsend. She wants Townsend to leave her and her daughter alone, she will give Townsend Red on a silver platter. He asks her how are they going to escape.

Park calls Aram and tells him that Ressler is not better, they are pumping him full of antibiotics. He tells her that Liz was taken, but he has good news, he has the name of the guy who pulled it off, Townsend’s #2, Godwin Page. So if they can get to Page, they can get to Liz.

Liz tells Godwin that he heard them talking, they planted a chip in his neck. She gives him the pairing knife, so he can take it out. She tells him to reopen the wound, don’t think about it, then take out the chip. Godwin gets it, she takes the chip and tells him that this is good. Godwin gets loose, when one of Red’s men goes to check on him, he uses the knife on him.

The task force has Godwin. Ressler is getting worse. Liz pretends to call Mrs. French who is watching Agnes, but he calls a hotel and speaks to Townsend.

Aram is in with Godwin, he tells him that he won’t help, he is not betraying Townsend. A few minutes later, he gives in, for immunity, he tells them where Liz is and what her plan is.

Dembe, Red, and Liz are in an SUV, she has the chip and she activates it so that Townsend can locate them. But her plan doesn’t work, Red gets her on a plane and out of there.

Panabaker tells Cooper that Keen is a fugitive and she feels good about the DOJ’s directive. They issued a burn notice on Keen, they want her scrubbed, eliminated, she represents a liability on the bureau. Once they bring her in, nobody in the task force will have existed and curtain call on the program.

Red tells Liz that the night of the fire, there are no words to describe how he felt when he saw her in pain. The scar is a permanent reminder of how the choices they made have affected her life forever. Its shape was so clear in his memory like he had seen it before. One day there was a map, not a match, but eerily close. It became the symbol of the most important aspect of his business, and image, representing the danger she faces and the promise to protect her from it. And this is where it all began, along the banks of the seas that it resembles.

They arrive in Riga, Latvia. They get into a vehicle. Liz asks Red why he was at the fire, did he work with her mother. He says he knew her mother more than she knew herself.

They arrive at the destination, which is heavily guarded. Red tells her that this is where it all started. She wants answers, so they are going to start with the one she already knows, the identity of N13. She says she was right, he says some of it. He tells her that he is N13, but he didn’t steal anything. He tells her that Katarina Rostova was never framed or killed. The Sikorsky Archive was a seed, the beginning of what was to become one of the most sophisticated intelligence in existence. It had one guiding purpose, to give him the power to keep her safe, and her mother hidden. This place contains a machine that has been his life’s work for three decades. He opens the door and says, “this is the Blacklist.”