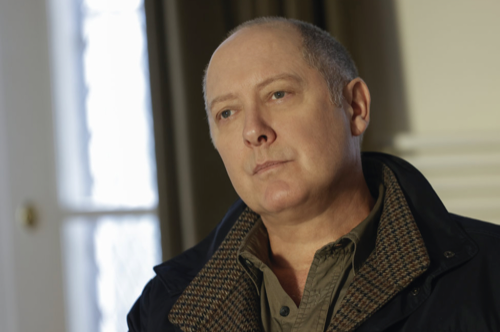 Tonight on NBC their hit drama The Blacklist starring James Spader airs with an all-new Thursday, November 18, 2021, episode and we have your The Blacklist recap below. On tonight’s The Blacklist Season 9, Episode 5 called, “Benjamin T Okara”,  as per the NBC synopsis, “Dembe’s position as an FBI agent causes complications for Red as the Task Force handles a case involving military technology. Cooper and Park each find their personal lives increasingly complicated.”

Tonight’s episode begins with Park, who arrives to train cadets, she hasn’t told her boyfriend that she is back with the Task Force. Meanwhile, Dembe goes to see Red, who asks him about a condition that includes fatigue, blurred vision, headaches, first reported by an American diplomat in Cuba and now in Nato personnel around the world. Mysterious ailment caused by a mysterious weapon.

Red says one of those weapons has gone missing, one that the US’s enemies would love to get their hands on. The Americans transformed Cuba’s model into a fierce model that can cause a new form of gorilla warfare. Red tells him to focus on finding this weapon.

Dembe goes to meet with the Task Force and updates them on the missing weapon. The Chief Engineer of this weapon is also missing, his name is Benjamin Okara. Agent Park arrives late to the meeting.

Darpa Headquarters, Arlington VA. Agent Ressler and Park are there to talk about the missing weapon. The project is classified and nobody is going to talk to them, but as they are leaving the receptionist tells them that Darpa is investigating the missing weapon.

There were five scientists on a team, Stan Rogers was killed in a car crash yesterday, the others disappeared. Park asks for all their names. Stan’s family calls someone to say that Stan is missing, all of a sudden, this high-frequency weapon is turned on, she covers her ears and starts to cry.

Cooper calls his wife and says he sent a blood sample to the lab to see if he was drugged, he has to wait a week for the results.

Park and Ressler got all the names of the scientists, their photos are on a board and the Task Force is going over them. All of them are missing. Rogers had brain damage that was worse than that was caused by the crash. These scientists were the only ones who know how the device works, outside of Okara, and if he gets rid of them he secure exclusive access to the technology for his buyer.

Okara also provides a demonstration of the weapon’s capabilities by killing the scientists. Meanwhile, Red meets with Yovan, he wants access to his old airfields, and Dembe would interfere with a profitable collaboration. In fact, Dembe has been cut off from everything of his, and having him at arm’s length is better than not having him near him. Yovan would prefer to kill him, Red says killing an FBI agent is stupid. In exchange for his access to the airfield, he will settle their dispute with Jalal, guarantee safe passage for their product to Panama. Their profits will soar. Red says Dembe is his responsibility, if anything has to be done good or bad, he will take care of it.

Park and Ressler arrive in a motel, Olivia Martinez is dead and Okara is gone. The Pentagon has shut down the scene.

Cooper gets a call from a detective regarding the murder of Doug, they show up to talk to Cooper in person.

Red is sitting on a bench when one of Yovan’s men is following him but Xiu ambushes him and takes his gun.

The detective remembers seeing Cooper at the scene, Cooper says Doug was his neighbor for many years so when he saw the commotion he dropped by to see what was happening. He goes on to say that Doug had an affair with his wife years ago, but he suspects that they already know that. Cooper says he wasn’t fond of the man, but he wasn’t anywhere near his house the night he died, he was at a retirement party at the taproom, he left around 11 and went home, he was with his wife.

Okara is sitting in a car, his hand is shaking, maybe from using the weapon. He is watching Park and Ressler enter a building with their weapons drawn. They find Hans and tell him they found a message in Olivia’s motel room that led them to him. Dembe tells him that Olivia is dead and they are there to help. Hans tells them that Ben was their friend and he knows more than anyone else why this weapon should not be used, it was used on him. He was paid to study the effects of the weapon, he has tremors, light sensitivity, and headaches. He wiped their research.

Hans says he won’t leave Natesh and Marianne, he found Stand and Olivia and he can’t let him find them. Park wants to take him in, she tells him that he is not safe. He says ok and asks to grab his phone. All of a sudden, Hans hits Park on the head with a bottle and knocks her out, making a run for it while Dembe is outside on a call with Aram. Osaka sees what is going on and launches the weapon, both Hans and Park are affected. Dembe sees a blue ban leave and runs to help Park who is having tremors.

Cooper’s wife calls him, she says the detective called her and he should tell the truth, because now they are looking at her for his alibi and he has to let her know if he wants her to lie to the police, he tells her to lie.

Red goes to see Sherwin and tells him that he wants to make his business even better. Sherwin doesn’t want to work with Red, so Red shows him his skinner tattoo. Red gets an address for Okara from Sherwin.

The task force finds Okara, he has a detonator in his hands. He tells them that they don’t understand, he says they knew how to build it. He doesn’t want to sell it, he wants to destroy it and the six people that know how to build it. He bought the world a few years, he tells them that it is up to them to do the rest. The task force run, Osaka pushed the button, and blows up.

Dembe arrives in his apartment, little does he know that there is a hit on him. But when he walks in, he finds a man dead, Red is there and he says he violated their rules and now he needs him to do the same.

Cooper is home, he thanks his wife for lying to the detective, she walks away.

Yovan is killed, Xiu calls Red and tells him it is done.

Dembe receives a package, Red tells him to keep the box and on the day he decides to leave, open it. Dembe opens it and tears are streaming down his face.

Park tells Ressler that she keeps secrets because she is terrified of the flood gates, she is afraid of losing control and what happens to her when she does.