The Bold and the Beautiful Spoilers: Bill Gets Back With Brooke – Deacon Fails After Ridge Split? 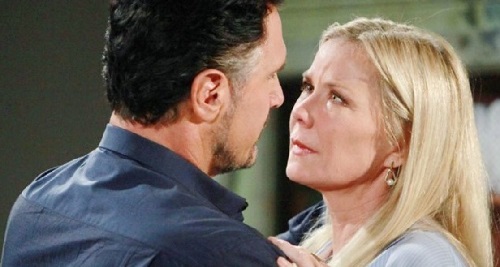 The Bold and the Beautiful spoilers document that Bill Spencer (Don Diamont) will offer advice to Liam Spencer (Scott Clifton). Deacon Sharpe (Sean Kanan) will be the focus for Clifton’s character.

Liam is concerned that his wife, Hope Spencer (Annika Noelle), is deluding herself into thinking she can develop a normal relationship with her father. But her idyllic philosophy, which Liam shares on certain worldly topics, is driving the need to bond with Deacon.

Fans are right to point out that Liam and Bill do not have a normal father-son relationship. The Dollar Still shocker with Steffy Forrester Finnegan (Jacqueline MacInnes Wood) and Liam being held on the floor against his will at Spencer Publications are just two backstories that can be cited to prove dysfunction.

Bill does care about his three sons. But his recent off-beat approach to problem-solving led to the cover-up of a hit-and-run.

That resulted in Bill and Liam’s imprisonment. Diamont and Clifton’s characters could still be wearing unfashionable jumpsuits if not for Thomas Forrester (Matthew Atkinson) and Hope’s strenuous intervention.

Devoted fans see the hint. Bill is single, and Katie does not want to mingle with him as the Christmas season approaches.

The tension between Brooke and Ridge has happened rather often through the years. But the mega-time married couple does not have to fully break for Brooke to seek Bill’s counsel as Liam does.

Taylor Hayes (Krista Allen) returns to town in a few weeks. Ridge will be fully aware of her presence, with the Sheila threat serving as a bonding topic.

There is no question that Brooke loves Ridge more than Deacon or Bill. But she has Hope through Kanan’s character and retains at least a mild spark with Bill.

Pairing Brooke with Deacon is now plausible. That could be the head-fake.

Maybe another kiss happens between the former Brill? And no matter the setting, it could be meaningful for both people.