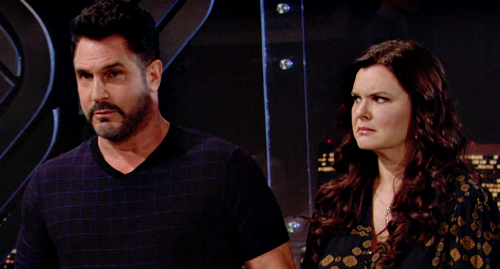 The Bold and the Beautiful (B&B) spoilers tease that Bill Spencer (Don Diamont) may target Forrester Creations and get revenge for Justin Barber’s (Aaron D. Spears) new alliance. Ridge Forrester (Thorsten Kaye) and the company he’s running could easily pay the price for working with Justin, so let’s discuss the rocky road ahead.

When Justin made his big pitch to stay out of prison and join forces with Ridge, he argued it was only a matter of time until Bill came for the Forresters again.

Of course, the alliance itself might prompt a move against the Forresters! Bill is bound to feel more betrayed than ever when he realizes Justin is handing over dirt to Ridge and plotting against him.

Ridge may suffer consequences for making Justin an ally since Bill’s so riled up. Bill was deeply hurt by Justin’s actions, so this will really be twisting the knife.

We could see Bill scheme and deliver a serious hit to Forrester Creations, but things could get complicated due to Brooke Forrester’s (Katherine Kelly Lang) push for power.

With Brooke taking on a larger role and more responsibilities at FC, Bill will be targeting his beloved ex as well – and that could get him in trouble with Katie Logan (Heather Tom). B&B spoilers say the show will highlight Katie and Brooke’s bond in the coming weeks.

That could be in preparation for a story where Bill goes after Forrester Creations and potentially hurts Brooke in the process.

It’s something Katie surely wouldn’t be happy about. Katie might feel like Bill’s letting his rage over Justin’s betrayal cloud his judgment, but Ridge and Justin are striking first!

Justin and Ridge should know better than to start a war with “Dollar Bill” Spencer, but that’s exactly what they’re doing by making this alliance happen in the first place.

They’ll only have themselves to blame if they provoke Bill into making destructive moves that put Forrester Creations at risk.

Brooke could get caught in the crossfire and so could Katie depending on how things play out. Regardless, Bill won’t sit back and let Justin get away with targeting him in this way.

Bill’s surely going to target Justin right back – and that means making Forrester Creations a revenge target, too.

Since Forrester Creations now has Justin as a secret weapon, perhaps Carter could become a secret weapon for Spencer Publications. Carter’s likely going to be fired once his continued involvement with Quinn Fuller (Rena Sofer) comes to light.

That could leave Carter in need of a job, so he might as well turn against the Forresters and help Bill with his takedown.

Carter could become a proud powercouple with Quinn and gain some power at Spencer as Bill’s new right-hand man. It could set up quite the war and bring some entertaining scenes.