The Bold and the Beautiful Spoilers: Bill’s Dangerous Deacon Solution for Liam 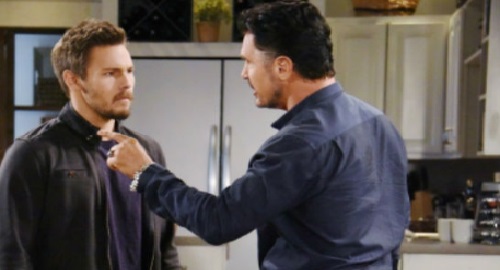 The Bold and the Beautiful (B&B) spoilers tease that Bill Spencer (Don Diamont) will have a dangerous Deacon Sharpe (Sean Kanan) solution for Liam Spencer (Scott Clifton) when the Spencer men get together to plot against Hope Spencer’s (Annika Noelle) dad.

Liam was probably hoping that Deacon would just go away and make Hope lose interest in reconnecting with her father. This is a family crisis that Liam would rather not deal with, but it’ll indeed have to be dealt with one way or another.

Brooke’s opinion carries a lot of weight and will only further embolden Hope when it comes to seeking a real relationship with Deacon. Liam may also start to fear a Deacon and Brooke reunion could happen once he worms his way into their family.

Ridge Forrester’s (Thorsten Kaye) marriage to Brooke will be collapsing all around them, so Liam may sense trouble if Deacon intends to take his big chance. Of course, Liam will also fret over the conflict that’ll be erupting between Hope and Steffy Forrester (Jacqueline MacInnes Wood).

Liam will feel like there’s always going to be the potential for terrible turmoil if Deacon hangs around. He won’t want Hope setting herself up for pain – and he won’t want the kids put at risk either.

At the same time, Liam will know he could do serious damage to his relationship if he pushes back too hard. Brooke and Ridge’s failing marriage should serve as a cautionary tale in some ways, so Liam won’t know what to do.

Liam will open up to Bill about all the Deacon drama, so Bill will have some guidance to pass along. He may start by offering to handle Deacon for his son, but Liam certainly won’t want Bill doing anything that might get him in trouble with the law!

Instead, Liam may feel like this is an issue he has to tackle himself, though he’ll definitely be open to suggestions on how to do that. Bill will offer a solution, which could be risky considering he isn’t usually the greatest at dishing out advice.

Nevertheless, Bill will have some words of wisdom and may argue that holding onto Hope is what’s most important. Letting Deacon in their lives may be dangerous, but Bill might think it’d be worse for Liam to stand his ground and lose Hope over this.