The Bold and the Beautiful Spoilers: Brooke Accuses Quinn of Cheating, Blasts Enemy 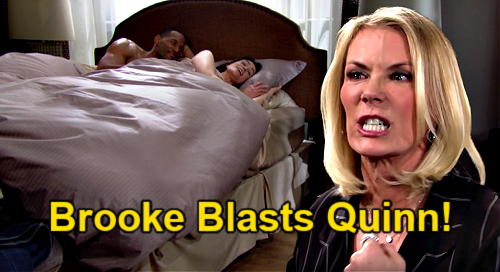 The Bold and the Beautiful (B&B) spoilers tease that Brooke Forrester (Katherine Kelly Lang) seems poised to accuse Quinn Forrester (Rena Sofer) of cheating, even if that’s not what Quinn’s doing this time around. Brooke may still blast the enemy for accepting Carter Walton (Lawrence Saint-Victor) passion permission and try to make Quinn feel guilty for her upcoming choice.

Eric Forrester (John McCook) has seen the special bond that Quinn and Carter have, but he also trusts in Quinn’s devotion to him.

Since Eric can’t make love to Quinn, he’s weighed all his options and determined that the best thing to do is let Quinn sleep with Carter.

Eric’s giving Quinn a pass to hit the sheets with the man she had an affair with, so this is obviously going to be controversial!

At first, B&B spoilers say Quinn will balk at sleeping with anyone but Eric. It’s true that Quinn cheated on Eric before, but that was only because he made her feel undesirable and pushed her away.

Quinn didn’t fully grasp the situation before since Eric was keeping his erectile dysfunction under wraps.

Now that Eric’s been open about that, Quinn wants to be completely committed to him. That’s why Quinn will insist on marriage loyalty initially instead of this version of an open marriage that Eric is trying to sell.

Carter will back Quinn up on that since he won’t want to do anything that might rock the boat. He may feel like even if Eric approves, others in the Forrester clan might not understand.

However, Eric feels like what happens in his marriage isn’t up to the outside world. This arrangement is only something that Eric, Carter and Quinn can decide.

During the week of September 13-17, Quinn will wrestle with what to do – and so will Carter.

The fact that Carter and Quinn developed a connection beyond just passion will make things more complicated. Quinn and Carter declared love, so they’ll know they’ll be entering risky territory if they do this.

Nevertheless, Carter and Quinn will ultimately let their desire for each other take over during the week of September 20-24.

Sooner or later, Brooke is bound to make a shocking discovery, so she might get the wrong idea at first.

If Brooke overhears something or even catches a glimpse of Quinn sneaking off for a private Carter moment, she may try to rat Quinn out for cheating.

Imagine Brooke’s surprise if Eric reveals he gave Carter and Quinn an open invitation to do whatever they want behind closed doors!

Brooke should learn the ED truth and hear about this open marriage solution at some point.

You can bet she’ll think Quinn’s selfish for going along with the wishes of a man in pain.

Once Quinn and Carter surrender to what they’re feeling, they’ll face a whole new kind of backlash since Eric approved this move.

The Bold and the Beautiful spoilers say Quinn and Brooke’s war is far from over, so stay tuned.

CDL will have other great Bold and the Beautiful spoilers, updates and news, so make us your top hotspot.