The Bold and the Beautiful Spoilers: Brooke Kicks Ridge Out, Separates from Husband After Major Deacon Fight? 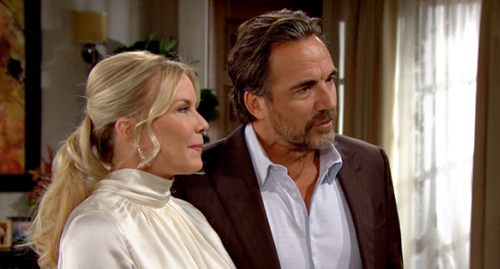 The Bold and the Beautiful (B&B) spoilers tease that Brooke Forrester (Katherine Kelly Lang) may kick Ridge Forrester (Thorsten Kaye) out and separate from her husband after a major Deacon Sharpe (Sean Kanan) fight. Let’s talk about what’s coming up during the week of November 29-December 3.

Deacon has been pretty calm so far when it comes to handling all the naysayers in Hope’s life. He doesn’t want to cause unnecessary drama for Hope, so he’s trying to be careful.

However, Ridge has a knack for pushing buttons and tends to spew some pretty nasty things whenever Deacon is around.

It looks like Deacon will get tired of listening to all the trash-talking. The conflict between Deacon and Ridge will escalate, so Deacon seems poised to fight back and make Ridge even more riled than before.

Brooke Forrester (Katherine Kelly Lang) will feel stuck in the middle of this battle, so she’ll have a serious outburst of her own that sends things even further downhill.

Later, Ridge will remind Brooke of his deep love and insist he’s only trying to protect her as well as Hope Spencer (Annika Noelle).

Ridge just won’t get why Brooke and Hope refuse to see that he wants what’s best for them. Brooke will hear Ridge out, but she may feel like she’s talking to a brick wall when it’s her turn to speak.

Although Brooke will make a strong case for standing by her daughter, Ridge still won’t agree with letting Deacon in Hope’s life – especially when it comes to the grandkids.

B&B spoilers say Ridge’s anger will reach a boiling point and go bubbling over, so this fight will be a real doozy!

It’ll also leave Brooke ready to make a significant choice about her family’s future, so that could mean taking drastic action against Ridge and his stubborn stance.

Since Ridge won’t budge and will continue to clash with Brooke if he sticks around, Brooke may think it’s best if he stays elsewhere.

Brooke may force a separation until they can all cool down and figure out if there’s a path to peace.

Regardless, Brooke and Ridge’s marriage will soon be in real trouble, which could give Deacon the opening he needs to score a Brooke reunion.

The Bold and the Beautiful spoilers say Brooke will feel backed into a corner and may make Ridge pay the price as a result.

CDL’s where you want to be for fantastic Bold and the Beautiful spoilers, news and updates, so visit us frequently.