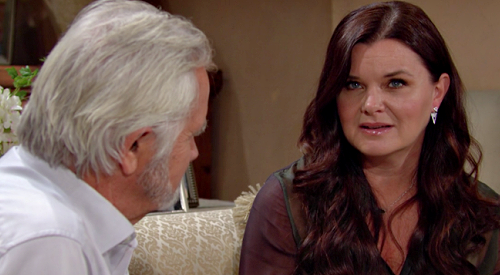 The Bold and the Beautiful spoilers document that Brooke Logan Forrester (Katherine Kelly Lang) remains certain that Quinn Fuller (Rena Sofer) needs to be out of Eric Forrester’s (John McCook) life. Her multiple-time husband, Ridge Forrester (Thorsten Kaye), was passionately relaying the same message at the Forrester mansion. But Eric and Quinn were having none of it.

B&B fans are following a storyline that is far more than it initially appeared to be. McCook is shining brightly in daytime, as this respected actor is delivering some of the best performances of his enduring career.

Eric is confronting his mortality and fears of loneliness, both of which were sparked by, and possibly causing, his revealed ED.

Bold and the Beautiful Spoilers – Brooke Logan Forrester Knows All

Those who like Brooke would refer to her as the matriarch of the Forrester family. She is also smart, accomplished in business, and beautiful.

Quinn would disagree with each compliment. Her reply would tag Brooke as a vindictive gossip who offers piercing opinions about anyone who she decides to dislike.

A balanced take presents Brooke as far more invested in the Forrester’s world than Quinn ever has been or will be.

So, Brooke’s take on Eric, one of her former husbands and the father of two of her children, matters. Too bad, Quinn.

Bold and the Beautiful Spoilers – Katie Logan and Not Donna Logan?

Even Brooke fans must grudgingly acknowledge one point. Brooke is inexplicably not encouraging Donna Logan (Jennifer Gareis) to comfort Eric during his time of crisis.

Katie Logan (Heather Tom) means well. She is not making a play for the man who Donna recently revealed is still the love of her life and also one of his ex-wives.

Tom’s character is Eric’s next-door neighbor. She is also connected to him through her sisters. Brooke appears so focused on Quinn’s latest outrageous behavior that she can not see the danger of Katie bonding romantically with Eric.

Bold and the Beautiful Spoilers – Eric Forrester’s Outlook Is Clouded

Brooke was right about something else as well. She told Katie that Eric is not thinking clearly, which is why he continues to endorse Quarter.

But fans see the pain on his face. He looks at Quinn’s portrait, which Ridge labeled ugly. Two points for Quinn, the likeness is exact and the image is resplendent.

Eric’s problem is that he sees the idealized version of his wife in the portrait and always has. The reality is that Quinn has not been able to handle marriage.

Eric has always deserved better, which has been Ridge and Brooke’s accurate complaint about Queric all along.

This site is a leading source for everything linked to The Bold and the Beautiful. Check back on CDL regularly for B&B spoilers and news!