The Bold and the Beautiful Spoilers: Carter Fantasizes About Quinn While in Bed with Zoe

BY Heather Hughes on May 30, 2021 | Comments: Leave Comments
Related : Soap Opera, Spoiler, Television, The Bold and the Beautiful 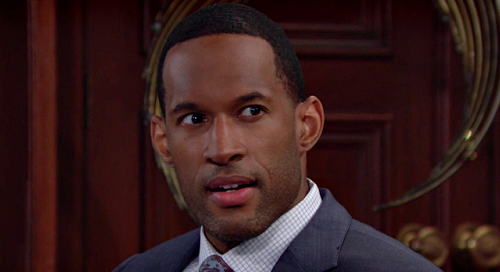 The Bold and the Beautiful (B&B) spoilers tease that Carter Walton (Lawrence Saint-Victor) may fantasize about Quinn Forrester (Rena Sofer) while in bed with Zoe Buckingham (Kiara Barnes). It’s easy to see how Carter might imagine the wrong woman as the lovers reconnect.

B&B fans know Quinn and Carter have agreed to put their fling behind them. They were what each other needed for a fleeting moment in time, but they’re determined to move on and get their old relationships back on track.

However, Carter and Quinn will soon find that their passion is awfully hard to shake.

It should be particularly hard for Carter since he honestly doesn’t seem that into Zoe anymore. Quinn genuinely loves Eric and was just missing the intimacy in their marriage. Carter, on the other hand, was burned badly by Zoe and seems to have lost his spark with her.

It feels like guilt and the need to cover what happened with Quinn were behind Carter’s decision to reunite with her. Carter will always care about Zoe, but it’s obvious he doesn’t want to spend the rest of his life with this woman.

The love they used to share just isn’t the same on Carter’s end – and the lovemaking may not be what it used to be either.

Now that Carter’s had a taste of Quinn’s steamy prowess, Zoe may pale in comparison! Regardless, it’s hard to believe Carter will be able to keep his mind on Zoe once they finally seal this reconciliation in the bedroom.

Carter’s thoughts may drift to Quinn instead and add to his sense of remorse. We may see Carter feel terrible for thinking of Eric Forrester’s (John McCook) wife during the steaminess and not the fiancée he’s trying to reconnect with.

Zoe could easily pick up on Carter’s uneasiness and feel the tension between them. She might even wonder if he’s thinking of Shauna Fulton (Denise Richards) since she believes Shauna is the one he hooked up with.

This could turn into quite the mess for Carter, so stay tuned to see how things will turn out for him!