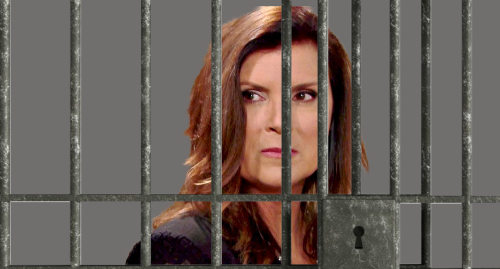 Carter recently told Ridge Forrester (Thorsten Kaye) he was hoping to get the hearing moved up, so they could be well on their way to making sure Sheila legally has to stay away from Steffy and her family.

Of course, getting served just might trigger Sheila’s desire to pay a visit to the cliff house.

It could rile Sheila up enough to demand a confrontation over what she’ll inevitably view as an extreme move.

Sheila has warned that Steffy will pay dearly if she dares to stand in the way of the relationship she wants with her son and grandson.

A restraining order is going to be a giant roadblock if it sticks, so Sheila is sure to fume. However, Steffy will explode as well once Sheila doesn’t listen to Finn’s push for her to stay away.

On September 24, Sheila will indeed make another surprise visit that leaves Steffy furious.

If the restraining order is a done deal and completely official by then, Steffy will have grounds to call the cops and have Sheila arrested.

Naturally, Finn might have a problem with Steffy taking things that far.

Despite Sheila’s history with the Forresters and the threat she poses, Finn can’t help but feel something for her.

There’s part of Finn that still feels protective of Sheila somehow – as evidenced by how Finn reacted during Sheila’s pretend medical ordeal.

Finn may once again show he’s got a soft spot for his birth mom and argue that there’s no need to have Sheila thrown in jail over the restraining order violation.

Finn may think he can convince Sheila to leave and truly stay away this time, but Steffy may point out it’s obvious Sheila isn’t going to listen to them or the restraining order itself for that matter.

Steffy may feel like handcuffs and a jall cell are the only way Sheila’s going to get this through her head.

Will Sheila’s restraining order violation cause Finn and Steffy’s next argument? Will Sheila stir up more relationship conflict once she visits unexpectedly and potentially winds up facing an arrest?

The Bold and the Beautiful spoilers say Sheila will continue to make waves, so don’t miss what’s in store.

CDL will have all the sizzling Bold and the Beautiful spoilers, updates and news you need, so make us your number one source.