The Bold and the Beautiful Spoilers: Friday, February 26 – Liam & Finn Fight To Be Steffy’s Birth Coach – Wyatt Needs A Favor 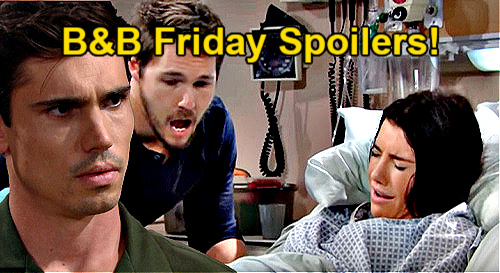 The Bold and the Beautiful spoilers for Friday, February 26, tease that Steffy Forrester (Jacqueline MacInnes Wood) will find herself in the middle of the two men in her life.

As B&B viewers know, Steffy is doing her best to continually reassure John “Finn” Finnegan (Tanner Novlan) that he’s the only man for her, while distancing herself from Liam Spencer (Scott Clifton).

Well, on Friday’s episode of B&B, Steffy will have to intervene when both Finn and Liam compete for her attention and favor. It looks like Liam may offer to be there for Steffy throughout her pregnancy and the baby’s birth, which will completely set Finn off.

Finn will probably make it very clear to Liam that he’s going to be there for Steffy during this pregnancy, and that Liam needs to stay away.

Meanwhile, Wyatt Spencer (Darin Brooks) and Katie Logan (Heather Tom) will continue their conversation in the Forrester Creations design office. As B&B viewers know, Wyatt trekked over to Forrester to broach a sensitive subject with Katie.

Wyatt wants Katie and the other Logan sisters to consider forgiving Flo Fulton (Katrina Bowden) and welcoming her into the Logan family fold.

Flo recently told Wyatt all about how she had hoped that she, Katie, Brooke Forrester (Katherine Kelly Lang), and Donna Logan (Jennifer Gareis) would be closer by now.

Of course, Flo is working against some cold hard facts – that she was a major co-conspirator in the illegal adoption of Beth Spencer (River Davidson and Madeline Valdez) to Steffy. That’s been hard for the Logan sisters to get off of their minds.

We’ll see what Katie says when Wyatt asks her for a big favor on Flo’s behalf. It looks like Wyatt will probably ask Katie to lobby on Flo’s behalf to Donna and Brooke.

Of course, Katie will probably be sympathetic to Flo’s cause, given that Flo donated a kidney to save Katie’s life. But it should be a very hard sell for Katie to try to get Donna and especially Brooke to accept Flo.

Finally, it appears that Thomas Forrester (Matthew Atkinson) will meet with Vinny Walker (Joe LoCicero) on Friday’s episode of B&B. As B&B viewers know, Thomas is determined to get to the bottom of what Vinny may have done to Steffy and Finn’s paternity test results.

Thomas and Vinny are supposed to meet at Vinny’s place, so viewers should see this interaction happen.

Of course, if Vinny does admit to switching the paternity results and making Liam look like the father, then Thomas is going to have a big decision to make about what he wants to do about it.

It could be tempting for Thomas to keep it all under wraps, and it will be a good test of whether Thomas is really the “new and improved” version of himself that he claims to be!

Friday’s episode of B&B is going to be awesome, so be sure to tune in! Stick with us here at CDL for the latest Bold and the Beautiful spoilers, updates, and news. We’ve got you covered!