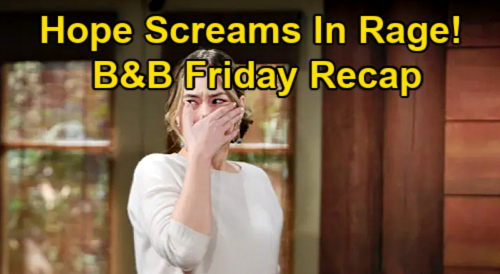 Hope wondered what was going on, as Liam stalled and asked Hope to remember how much they loved each other.

Liam said that they would be ok, but that something was going to affect their family – both of their families. Hope sat down, and Liam went on, saying that Hope was the center of his universe. “Just tell me,” Hope said quietly. Liam said that they must move forward. “From what?” Hope asked warily.

“A mistake that I made that I should have told you about right away,” Liam said. Liam explained that he thought Hope was kissing Thomas Forrester (Matthew Atkinson), and Hope interrupted, saying that they’ve already been through this. Hope said that it was in the past, irrelevant, and that they should forget about it.

“No, we can’t,” Liam said. “I wish we could. I tried, but we can’t.” Liam lamented that he should have confronted Thomas, but that he left and drove to Steffy’s house.

Liam described in misery how he started drinking to numb the pain and kept drinking. “I’m so sorry,” Liam said, crying. “I wish I could take that night back.”

Liam continued, saying that he should have come home, but he didn’t. Hope then realized that something awful must have happened, and she asked Liam where he slept that night. Liam was crying, and Hope got agitated.

“Is that what you’re trying to tell me? You and Steffy?” Hope yelled. “No, no, you and Steffy!?” Hope screamed.

Meanwhile, at the cliff house, John “Finn” Finnegan (Tanner Novlan) came back from a swim to find Steffy in the living room. Kelly Spencer (Colette and Avalon Gray) was at her grandparents’ house, so Steffy and Finn had the whole evening to themselves. “I thought we could talk,” Steffy said.

Finn gushed about how happy he was and how his life had more meaning now. Finn said that he was thinking about what their future – their family – could look like. Steffy said that Finn was sweet, and Finn acknowledged that things were more complicated for Steffy because she shared a child with Liam.

Finn referenced the picture on the wall, saying that Steffy had more emotional ties than he did but that he wasn’t threatened by it. “I know what we feel for each other,” Finn said. “What I see there is a snapshot of your past.” Finn said that he hoped that Steffy saw her future differently and with him.

“I do see a future with you,” Steffy said. Finn said that he thought about their future a lot, and that he wanted to spend the rest of Steffy’s life with her. “Tell me that you want that, too – a family, even,” Finn said, smiling. Steffy said that she thought that’s a real possibility – of course that will depend on how the doc feels about her cheating and pregnancy!

In the Forrester Creations design office, Paris Buckingham (Diamond White) was alone when Carter Walton (Lawrence Saint-Victor) entered the room. Carter hoped that Paris had changed her mind about the Forrester Foundation job offer. Paris thanked Carter, but she said that she couldn’t take the job.

Over in the Forrester CEO office, Zende Forrester Dominguez (Delon de Metz) entered to find Zoe Buckingham (Kiara Barnes) there. Zoe wanted some help with work, but Zende got right to the topic of Paris’ job offer.

Zoe said that Paris might not take the job, and Zende gushed about how Paris would be an amazing addition to Forrester Creations.

Zoe said that she was pretty sure that Paris would turn down the job offer, and Zende wondered why Zoe didn’t want Paris here. Zende figured it must be sister issues, but he said that he wasn’t going to let Paris pass up this opportunity. “There has to be room for both of you,” Zende said earnestly.

Zende then went to the design office and found Carter. Carter relayed that Paris just left and that she had turned down the job offer. Zende rushed out of the office suddenly, and he caught up with Paris in the backstage area. “You can’t leave – don’t go,” Zende urged.

Paris said that she wasn’t taking the job and that there was no reason to stay. “I think there is,” Zende said. “Tell Carter that you changed your mind. Don’t let what’s going on with Zoe hold you back,” Zende told Paris.

Zende went on, saying that Paris was beautiful, intelligent, compassionate, and that she was needed here.

Paris smiled, saying that was exactly what she needed to hear. “Now I feel like there’s nothing that could make me drive away from here,” Paris said, and with that she walked toward Zende and kissed him. Zende smiled.

That was a terrific episode of B&B, and it was a great way to round out the week. We’ll give you updates throughout the weekend as B&B news comes in. Remember, CDL is your source for the latest Bold and the Beautiful spoilers, updates, and news.