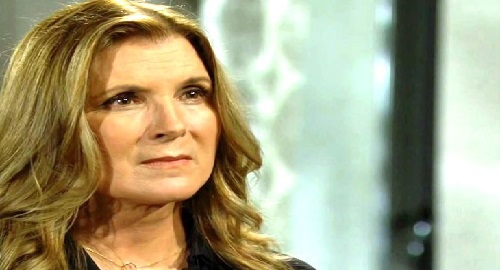 For starters, Sheila will remain furious with Steffy, but she’ll refuse to give up on her goal of a relationship with John “Finn” Finnegan (Tanner Novlan) and Hayes Forrester Finnegan (Piper Harriot). Sheila just needs some encouragement, so she’ll get some from a new friend of hers on Friday’s B&B episode.

Nick Waters is set to reprise his role as Keith, the assistant manager at Sheila’s hotel. We’ve already seen Keith being quite friendly with Sheila, so he may be chatty once again. Sheila tends to give Keith deceptive versions of her situation, so that should be the case this time around as well.

Since Sheila will apparently mislead Keith, it sounds like he’ll mislead her right back and give her some advice that’s probably going to end in disaster! Meanwhile, Liam will enjoy a family day with Steffy and Kelly. They’ll reconnect and discuss all the Sheila drama that’s been stressing Steffy out.

Liam will let Steffy know he’s there for her and may point out that Finn is siding with his wife. Although Liam may think that’s a good sign, part of Steffy may worry Sheila’s still going to sink her hooks into Finn eventually.

As for Finn, he’ll head over to the cabin and sit down for conversation with Hope Logan (Annika Noelle). Hope will get updates on the latest round of Sheila mayhem as well, so she’ll be sorry for what Finn’s going through.

Finn will appreciate Hope’s willingness to listen and offer judgment-free advice, so they’ll have a deep discussion on Friday that’ll spill over into Monday’s show. Of course, Friday could also bring some closure on the Quinn Forrester (Rena Sofer) and Carter Walton (Lawrence Saint-Victor) chaos.