The Bold and the Beautiful Spoilers: Katie Runs Back to Bill After Carter Disaster 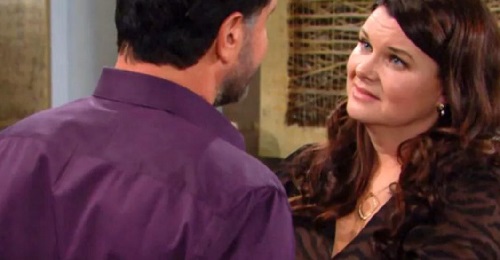 The Bold and the Beautiful (B&B) spoilers tease that Katie Logan (Heather Tom) may run back to Bill Spencer (Don Diamont) after a major Carter Walton (Lawrence Saint-Victor) letdown. Will Katie’s fresh romantic start be a bust?

B&B fans know Bill has worked hard to prove he’s a changed man and desperately wants just one more chance. Bill feels like he could really show his devotion this time and has made it clear that Katie is the only woman he wants.

Of course, Katie has heard all this a thousand times and just doesn’t have it in her to try again. Katie wants to feel certain she’s someone’s one and only love. She doesn’t want to have to compete for attention or feel like she’s living in her sister’s shadow.

There’s no denying that Bill’s past romantic entanglements with Brooke Forrester (Katherine Kelly Lang) hurt Katie deeply and left a dark cloud hanging over “Batie.” That’s why Katie has been making heart eyes at Carter, who says all the right things and has been making her feel desirable again.

It’s easy to see that Katie is falling fast and may already be imagining a bright future with Carter. Katie feels like she’s found a like-minded individual who’s smart, kind, handsome and pretty much everything she could want in a man.

The problem is Katie’s putting Carter on a pedestal and perhaps starting to consider him the perfect guy. In reality, Carter is far from perfect and proved that when he slept with Eric Forrester’s (John McCook) wife. Katie mostly blames Quinn Forrester (Rena Sofer) for the affair, but it takes two to tango.

Eric and Ridge Forrester (John McCook) have forgiven Carter, but Katie and B&B fans would be wise not to forget! Carter obviously has a short attention span when it comes to women since he blew past his Quinn pain and became interested in Katie – only to now seemingly be interested in Paris Buckingham (Diamond White).

It seems like Carter is always telling his female scene partner how special she is or how he’s never met anyone like her. Carter’s words ring hollow since he makes the same types of speeches every time. Katie may soon realize she’s not all that special to Carter if she spots him growing closer to Paris.

If Carter ends up in bed with Paris and Katie finds out, that could really seal the deal on a Carter romance not happening. Katie might as well go back to Bill if she’s going to choose a cheater who tends to disappoint.

In fact, we wouldn’t be surprised if Katie starts to realize no man is perfect and drifts back in Bill’s direction. Carter may blow things with Katie and inadvertently push Katie back toward Bill.

Whatever the case, Carter will enjoy lunch with Paris before having an epiphany regarding his love life. If that epiphany involves the realization that Carter’s falling for Paris, it could set the stage for heartbreak from many different angles.