The Bold and the Beautiful Spoilers: Kimberlin Brown Returns – Sheila Carter Back In LA 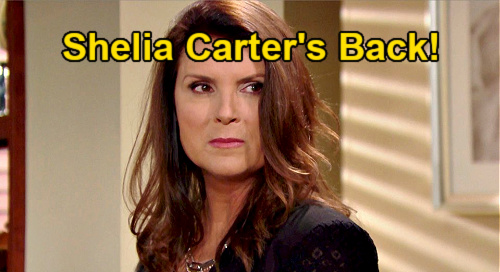 The Bold and the Beautiful spoilers document that Kimberlin Brown (Sheila Carter) will be returning to this fictional version of Los Angeles, California. This iconic daytime actor last reappeared in 2017.

Sheila’s most recent return saw her attempt to bond with Eric Forrester (John McCook). While he proved to be sympathetic to her initial physical plight, Quinn Fuller Forrester (Rena Sofer) was not.

She and Sheila engaged in a power struggle, with Quinn proving out as the winner. Brown’s character was forced to leave the Forrester mansion and hasn’t been seen since 2018.

So, why is one of daytime’s all-time villains returning now? Various possibilities can be considered, along with a brief review of history.

Bold And The Beautiful Spoilers – History Is Deep And Soapy

Sheila hadn’t been seen since 2003, which made her appearance unusual and shocking. As the characters and audience questioned, she was believed to have been killed off on The Young and the Restless in 2007.

In very soapy fashion, Brown wasn’t playing the character at that time, as Michelle Stafford (Phyllis Summers, Sheila Carter) was filling a dual role. Lauren Fenmore (Tracey Bregman) was thought to have killed her nemesis at that time.

B&B left the seeming disconnect open, as Eric is not known to have contacted Lauren about Sheila in 2017 or since. That suspension of disbelief scenario allows Brown’s alter ego to return again now and potentially impact both shows.

Sheila was known to have one son, Ryder Callahan (Wilson Bethel). His father was Tom Fisher (Roscoe Born). Those characters were on Y&R.

Considering that Thomas and Vinny were childhood friends, LoCicero’s character can’t logically be Ryder. However, Sheila could have had twin boys or she could have had another son.

If Sheila is Vinny’s mother, then her reappearance would fit directly into the plot considering his untimely, tragic death. Vinny also exhibited the same unbalanced qualities of Brown’s character, which implies that they were related.

Bold And The Beautiful Spoilers – Sheila Carter Was His Girlfriend?

If Sheila isn’t Vinny’s mother, then she could be his never-seen girlfriend. Her disappearance wasn’t followed by any information, leaving this possibility open.

Thomas often referenced Vinny visiting his girlfriend in upstate California. So, Sheila could plausibly prove to be that person. CDL is a leading source for everything linked to The Bold and the Beautiful. Check back regularly for B&B spoilers and news!