The Bold and the Beautiful Spoilers: Liam & Steffy’s Intervention – Keeps Hope & Finn Away from Deacon & Sheila 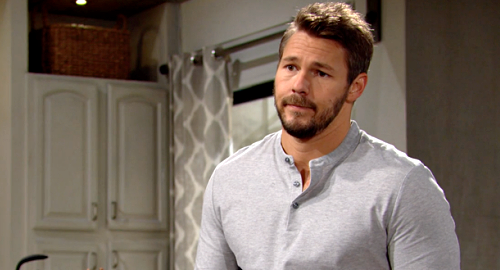 The Bold and the Beautiful (B&B) spoilers tease that Liam Spencer (Scott Clifton) and Steffy Forrester (Jacqueline MacInnes Wood) will force an intervention to keep Hope Spencer (Annika Noelle) and John “Finn” Finnegan (Tanner Novlan) away from their parents. These exes will lay down the law together to protect Finn and Hope from Sheila Carter (Kimberlin Brown) and Deacon Sharpe’s (Sean Kanan) twisted web.

During the week of October 25-29, Steffy and Liam will get some disturbing news. They’ll fear the worst when they find out Sheila and Deacon have supposedly fallen for each other.

Finn and Hope will explain the apparent love story that’s playing out, but it’ll just be a ruse on Sheila and Deacon’s part.

Liam and Hope will no doubt suspect that, but they’ll run into some trouble when it comes to their trusting spouses.

Hope wants to believe Deacon loves her enough to change and may find it hard to believe he’d go as far as to fake a romance with Sheila as part of some wild plot.

Likewise, Finn doesn’t know Sheila all that well and wants to believe there’s good in her, too. Perhaps Finn will urge Steffy to see that love is complicated and that Deacon actually has a lot in common with Sheila.

That doesn’t necessarily mean Finn will approve of the match, but he may at least understand why it happened.

Steffy, on the other hand, knows exactly how Sheila operates. Since Steffy doesn’t believe Sheila is capable of loving anyone but herself, she’ll think Finn’s birth mom just found another manipulation tactic.

Steffy will be concerned for Hope as well, so she’ll gladly work with Liam to keep Sheila and Deacon out of the picture.

We’ll see some secret meetings as Steffy and Liam plan the best way to stop risky parent-child bonds from developing.

Since Liam and Steffy will be determined to thwart any sort of connection, this could lead to them staging a true intervention and explaining their stance.

Steffy and Liam might come together to gang up on Finn and Hope when it comes to shutting their parents out of their lives.

Regardless, Liam and Steffy will definitely intervene – one way or another!

They’ll cook up a plan of their own during the week of November 1-5 to make sure Hope and Finn stay as far away from Deacon and Sheila as possible. That plan isn’t likely to work, but that won’t stop Steffy and Liam from giving it their all.

The Bold and the Beautiful spoilers say Deacon and Sheila’s faux romance will make major waves, so stay tuned.

CDL will have all the scorching Bold and the Beautiful spoilers, updates and news, so visit us often.