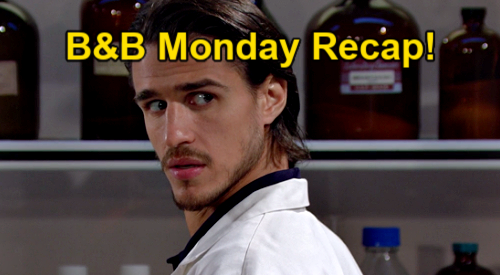 Standing in his apartment, Vinny bellowed at Thomas that John “Finn” Finnegan (Tanner Novlan) was a jerk, and that he didn’t like Finn at all.

“Steffy dodged a bullet, if you ask me,” Vinny said. Thomas pressed the issue further, and finally Vinny admitted that he ran Steffy’s paternity test, but that the science and the DNA gave the answer. “You’d better not be lying to me,” Thomas said, as he left the apartment hurriedly.

Meanwhile, at the hospital, Steffy and Finn finished up Steffy’s routine exam, which had included an ultrasound of the baby. Dr. Campbell (Tina Huang) entered the room, and she was happy to see Finn there supporting Steffy.

Finn said he loved Steffy and that he loved the baby, too.

Finn gushed over the ultrasound picture, saying that he couldn’t wait to meet the baby. Steffy replied that the baby was lucky to have Finn, and that there was only one thing that would make this better – if they had made the baby together.

After the appointment, Finn said he was going to go check on another patient’s results while he was at the hospital.

Katie had summoned her sisters to hear a pitch about Flo Fulton (Katrina Bowden), who Katie argued was their family no matter what she had done in the past. Katie noted that they weren’t currently treating Flo like family.

Brooke said that she had real reservations about Flo and Shauna Fulton (Denise Richards), but Katie argued that Storm Logan (William deVry) would want Flo in their lives.

After some talk about how they’ve all made mistakes – even some big ones – the sisters agreed that they needed to try to let go of the past.

Over at Spencer Publications, Flo talked with Shauna about her desire for acceptance from the Logan sisters. Wyatt Spencer (Darin Brooks) walked in, saying that you never know what could change the sisters’ minds. “I wouldn’t rule out acceptance by the Logans,” Wyatt used.

Soon, Flo got a call from Katie, who asked her to come over to Forrester Creations for a meeting. Flo left, and Shauna looked knowingly at Wyatt. Shauna asked Wyatt if he reached out to Katie on Flo’s behalf. Wyatt smiled.

In the Forrester Creations design office, Thomas sat thinking about his earlier conversation with Vinny when Steffy walked in. Steffy showed Thomas the ultrasound picture, and she noted that Finn went with her to her doctor’s appointment.

Steffy said Finn was really emotionally invested in the pregnancy, almost as if the child was his.

Back at the hospital, Vinny was working in the lab when Finn entered to check on some bloodwork for a patient. Finn was surprised to see Vinny there. “We met at Steffy’s house – you’re Thomas’ friend,” Finn said.

Vinny dryly noted that doctors don’t usually notice workers like him. Finn and Vinny had a brief stare down, and Vinny seemed to strongly dislike Finn.

Back in the Forrester Creations CEO office, Flo arrived to find the Logan sisters waiting for her. Flo said that she figured that she knew what this was about, and she proceeded to say that she was ashamed of what happened with Beth Spencer (River Davidson and Madeline Valdez).

“I want to be the daughter my father could be proud of,” Flo said.

Katie and Donna said that they believed Flo. “That means everything to me, thank you,” Flo said. As Flo turned to Brooke, she noted how much she had harmed Hope Spencer (Annika Noelle).

“I regret that more than anything in my life,” Flo said. “It would mean everything if you could believe me, too. Is that even possible?”

What a great episode of B&B! There’s plenty more coming your way for the remainder of the week, so be sure to tune in! Keep coming back to CDL for the latest Bold and the Beautiful spoilers, news, and of course our daily episode recaps.