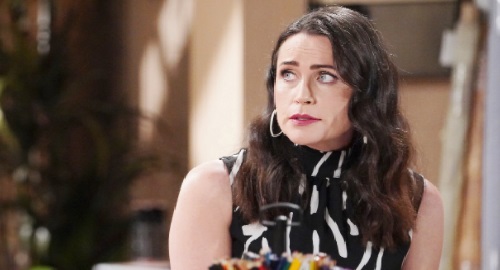 The Bold and the Beautiful (B&B) spoilers for the next two weeks tease that Eric Forrester (John McCook) will force Quinn Forrester’s (Rena Sofer) choice while Deacon Sharpe (Sean Kanan) uses a disguise to see Hope Spencer (Annika Noelle). Bill Spencer (Don Diamont) will also concentrate on a new romantic plan, so here’s what fans can look forward to.

During the week of October 11-15, Sheila Carter (Kimberlin Brown) will give Deacon the push he needs to agree to a partnership. Sheila will use Deacon’s shortcomings to her advantage and rope him into a mutually beneficial arrangement, though we all know Sheila will really be looking out for number one!

Meanwhile, Hope will voice her frustration when Liam Spencer (Scott Clifton) and Brooke Forrester (Katherine Kelly Lang) refuse to budge on their stance against Deacon. Liam will have a major argument with Hope about the role Liam should play in her life as well as Beth Spencer’s (River Davidson and Madeline Valdez) life.

Next, Deacon will don a disguise so he can head into Forrester Creations and see Hope in career mode. Hope will scold Deacon for how he goes about seeing her, but she’ll still be glad he’s making an effort and will desperately want to figure out a way forward with her father.

Ridge Forrester (Thorsten Kaye) will support Brooke as she works to keep Deacon out of Hope’s life, but he’ll also make time to blast Quinn again and bicker with Carter Walton (Lawrence Saint-Victor) for going along with Eric’s idea.

Other B&B spoilers say Eric’s ultimatum will prove difficult and devastating. He’ll lay out his new terms for Quinn, who’ll most likely have to decide if she can be married to Eric without passion. Eric seems poised to shut down the Carter arrangement and let Quinn choose one man or the other.

As for Bill, he’ll be a man with a plan. Bill will feel like he needs to up the ante when it comes to Katie Logan (Heather Tom) and winning her over, so he’ll put that plan in motion soon enough.

Paris Buckingham (Diamond White) will also get a present she doesn’t see coming – and it’ll come from a surprising source. Thomas Forrester (Matthew Atkinson) should be behind this gift and will end up celebrating a new agreement with Paris, so it looks like she may move in with him for a while.

However, that doesn’t mean Paris will slow things down with Zende Forrester (Delon de Metz). On the contrary since Zende and Paris will hit the sheets during the week of October 18-22 for the first time. Paris will no doubt feel closer to Zende once they’ve made love, but Thomas’ feelings for Paris should grow and complicate the situation.

Over with Carter, he’ll find a kindred spirit to share his pain with. Carter will battle some heartbreak, so Quinn seems poised to focus solely on her marriage to Eric. Crushed Carter will lean on someone who knows a thing or two about single sorrow, so Bill seems like an excellent fit here.

Later, Bill will seek assistance from Ridge and Brooke. He’ll hope they’re willing to come through as he schemes for a good cause and tries to prove to Katie that he’s changed.