The Bold and the Beautiful Spoilers Next 2 Weeks: Sheila Barges Into Cliff House, Steffy Gets Restraining Order 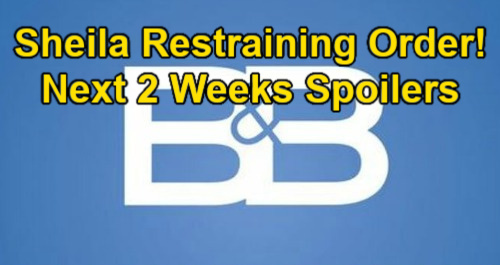 The Bold and the Beautiful (B&B) spoilers for the next two weeks tease that Quinn Forrester (Rena Sofer) and Carter Walton’s (Lawrence Saint-Victor) secret will be discovered – and Steffy Forrester’s (Jacqueline MacInnes Wood) fury unleashed. Hope Spencer (Annika Noelle) and Thomas Forrester (Matthew Atkinson) will also have a family day, so here’s what B&B viewers can expect.

During the week of September 20-24, Quinn and Carter will deal with the aftermath of their choice to reconnect passionately. Eric Forrester (John McCook) will face some complications of his own when Quinn’s motives are questioned.

That’ll leave Eric in a tight spot as he’s forced to cover up Quinn’s strange behavior, so he’ll fib and try to throw Katie Logan (Heather Tom) off the trail.

Even so, Katie and Brooke Forrester (Katherine Kelly Lang) will remain suspicious. Ridge Forrester (Thorsten Kaye) will feel the same way, so he’ll summon Justin Barber (Aaron D. Spears) to the main office and send him on a new mission.

Justin will have to follow Quinn and try to figure out exactly what she’s doing behind Eric’s back.

The problem is Quinn isn’t doing it behind Eric’s back at all! Eric has ED and is simply letting Carter fulfil Quinn’s bedroom needs, so Justin and Ridge won’t have the full picture here.

After Steffy and John “Finn” Finnegan (Tanner Novlan) get steamy, their marriage will once again be thrown into turmoil by Sheila Carter (Kimberlin Brown). Sheila will apparently barge in the cliff house again and leave Steffy flipping out.

As for Paris Buckingham (Diamond White), she’ll come to a conclusion about her time living with Finn and Steffy.

Paris will likely determine that she’s overstayed her welcome and plan to put some distance between herself and Finn since she’s crushing so hard.

Thomas will also have a relaxing day with Hope and Douglas Forrester (Henry Joseph Samiri) at the cabin. Hope has a large blended family, but she’ll be glad to give Douglas this family time – just the three of them.

Thomas will have a blast as well, but he’ll continue down the right path of a healthy co-parenting bond and won’t let old feelings take hold.

During the week of September 27-October 1, Steffy and Sheila’s war will reach a whole new level. Their faceoff will certainly be a nasty one as Steffy pushes Sheila to stay out of their lives for good.

If the Forresters are able to secure their restraining order by then, Steffy might even threaten to call the cops and have Sheila thrown in jail for violating it.

Meanwhile, Eric and Katie will have an honest discussion.

It seems Katie won’t really buy what Eric’s selling when he offers a Quinn cover-up, so she’ll gently push for the truth.

Katie has a little more finesse than Brooke in situations like this, so Eric may feel safer opening up to someone who’s less judgmental.

Katie may also open up about some personal things going on with Bill Spencer (Don Diamont) and make it easier for Eric to confess his own issues.

Whatever the case, Eric and Katie will have a discussion where they ditch the bogus explanations and focus on what’s real.

As for Justin, it looks like he’ll bust Quinn visiting Carter and give that ammo to Ridge.

Of course, Ridge will think he’s caught Quinn cheating and may rat her out to Eric soon after. Ridge is in for a shock once Eric eventually reveals the stunning true story!

The Bold and the Beautiful spoilers for the next two weeks say we’ll see some fantastic bombshells, so keep watching.

CDL will have other hot Bold and the Beautiful spoilers, news and updates, so pop back in soon.