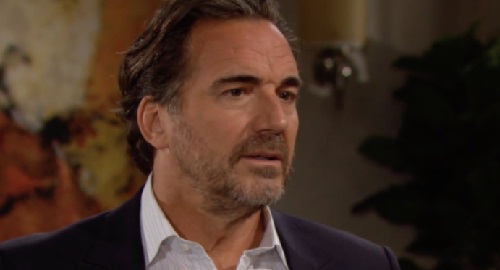 During the week of November 29-December 3, Ridge will find Deacon Sharpe (Sean Kanan) at the cabin and deliver a harsh warning to get out of there. However, Hope Spencer (Annika Noelle) will return with Brooke by her side – and they’ll leave Ridge furious when they insist Deacon should stay.

Later, Ridge will make a big declaration of his love and desire to protect Brooke, but she won’t think it’s as serious as her husband’s making it out to be. Brooke won’t feel like Deacon is all that dangerous in the grand scheme of things, so Ridge will be on the verge of reaching his limit here.

Brooke will make a significant choice, so she might feel like Ridge can either learn to respect Hope’s wishes or live elsewhere! While Ridge and Brooke’s marriage starts crumbling, Hope will hurl accusations after overhearing Steffy and Liam Spencer (Scott Clifton) strategizing. She’ll insist Steffy is interfering in her marriage, but Steffy won’t care what Hope wants to call it.

From Steffy’s perspective, this will be about shielding the kids from Deacon and Sheila Carter (Kimberling Brown). Speaking of Sheila, she’ll stop by John “Finn” Finnegan’s (Tanner Novlan) to pour her heart out again and leave Finn conflicted.

Meanwhile, Carter Walton (Lawrence Saint-Victor) will have a big realization about his love life with the help of Paris Buckingham (Diamond White) and their lunch together. It’ll be interesting to see what Paris says and how it helps Carter find his new path.

During the week of December 6-10, Brooke will reel when she finds out Ridge has given Hope an ultimatum regarding Deacon. Brooke won’t support this at all, so it’ll lead to another fight and back “Bridge” into a terrible relationship corner.

Ridge and Brooke will feel deadlocked, so their dreams for the future will be fading fast. Deacon’s dreams, on the other hand, will be something he fixates on as a real possibility – and that’ll frustrate Sheila more by the second.

Sheila will want Deacon to get his head out of the clouds and stop thinking he’s going to have some happy reunion with Brooke. Although Sheila won’t think a future between Deacon and Brooke will ever happen, he’ll disagree and may score more hope if Brooke separates from Ridge.

Hope and Deacon will force Brooke to tackle some tough questions on the spot later, so those could be about her history with Deacon. Speaking of history, that’ll be something on Ridge, Thomas and Steffy discuss at length.

Steffy and Thomas will support Ridge as they reminisce about their family’s past – no doubt setting the stage for Krista Allen’s debut as a Taylor Hayes recast on December 10. Liam will also receive guidance from Bill Spencer (Don Diamont) regarding his Deacon predicament, so the next two weeks will pack in plenty of drama.