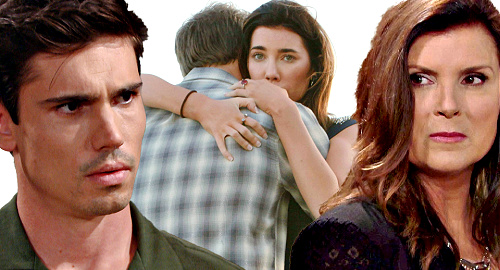 At this point, Sheila is starting to realize that a relationship with Finn and Hayes Forrester Finnegan (Piper Harriot) won’t be possible with Steffy as an obstacle.

That should become even clearer after Steffy and Sheila have their next B&B showdown.

Steffy will rip into Sheila like never before and urge her mother-in-law to get it through her head that Finn wants nothing to do with her.

Of course, that wouldn’t be the case if Sheila could turn Finn against Steffy. That angle would be Sheila’s smartest move at this point, so she might mull over the ideal strategy to make that happen.

What would be the best tactic to make Finn walk away from Steffy and this marriage, which is not yet legal?

Sheila might even fish for info from Paris Buckingham (Diamond White), who seems poised to play a big role in this story.

Paris could easily argue that Finn and Steffy are a strong couple – strong enough to make it past Steffy’s one-night stand with Liam, which led to the Hayes paternity deception.

Then again, Sheila might just get the idea herself from all her Internet research. She could determine that part of Steffy will always love Liam and try to use that to her advantage.

There’s no point in trying to win Steffy over or push for tolerance since it’s just not going to happen. Sheila has to start thinking about a plan to drive Steffy out of Finn’s life.

The only way Sheila stands a chance at having Finn willingly embrace her is to eliminate Steffy.

Naturally, killing Steffy would present the problem of landing Sheila in jail if she got caught – not to mention Finn would never forgive her.

What Sheila needs is a path forward where Finn doesn’t want Steffy in the picture at all, so she might try to spark some Liam temptation for Steffy.

Sheila might think a “Steam” affair is the answer. If that doesn’t work, Sheila could always try to set up a fake cheating situation and at least spark some suspicions for Finn.

Bottom line, it’d be a missed opportunity if Sheila didn’t use Liam and Steffy’s bond in her favor.

Steffy and Hope Spencer (Annika Noelle) have been thrilled about finally becoming the perfect blended family, but Sheila could blow that up if she plays her cards right.

The Bold and the Beautiful spoilers say Sheila will definitely need a new scheme, so we’ll see what she comes up with!

CDL’s where you want to be for the hottest Bold and the Beautiful spoilers, news and updates, so stop by often.