The Bold and the Beautiful Spoilers: Steffy Apologizes to Hope After Paternity Reveal – Marriage to Liam Destroyed 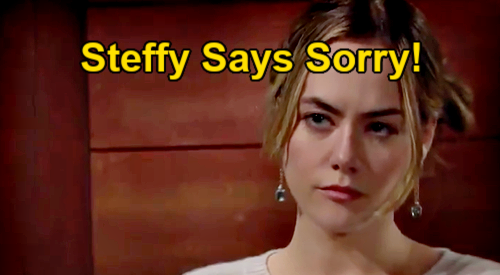 The Bold and the Beautiful (B&B) spoilers tease that Steffy Forrester (Jacqueline MacInnes Wood) will feel like there’s something important she needs to do. B&B fans know Hope Spencer (Annika Noelle) confronted Steffy about the cheating and pregnancy bomb soon after Liam Spencer (Scott Clifton) confessed.

Steffy was remorseful then, but she’ll be even more remorseful after the paternity results are revealed.

Steffy was hoping for her sake as well as Hope’s that John “Finn” Finnegan (Tanner Novlan) was the bio dad, but it’s Liam Spencer (Scott Clifton) who’ll be given the father title for now.

That’ll probably change through a paternity test tampering revelation down the road, but let’s focus on what the characters will know at this point in the story.

Once Steffy realizes this means she’s having another baby with Liam, she’ll fret over all the relationships involved here. Steffy will worry about losing Finn despite his previous claims that they’d get through this no matter what.

Although Finn will be thrown by the Liam father news, he’ll eventually find his way back to embracing his future with Steffy – even with a complicated family.

However, The Bold and the Beautiful spoilers say Steffy will worry about Hope’s reaction to the paternity shocker. After Hope has another tearful fight with Liam about the outcome, he may admit to Steffy that he is not sure they’re going to make it.

Steffy was really counting on Finn to be the father so they could all try to get their romances back on track, but this will change things in so many ways.

Although Steffy will know it can’t fix what happened, she’ll still feel like she needs to deliver a sincere apology to Hope.

Of course, both Steffy and Hope have made mistakes over the years – most of them involving Liam and the pull they’ve always felt toward him.

Nevertheless, it’d be out of character if Steffy didn’t acknowledge the current “Lope” blowup and feel bad about it. Steffy isn’t going to just say “too bad, so sad” and happily skip off with Finn. That’s not the kind of person Steffy is.

It’s not a matter of who did what in the past; it’s a matter of the story B&B’s telling right now – and right now, Hope’s hurting.

Steffy will want to recognize Hope’s pain and try to make amends, so she’ll apologize for everything Hope’s going through.

Will Hope accept that apology? Is there anything that Steffy can say that will prevent a ‘Lope’ split? Hope might lash out at first, but it seems like she may be reaching the sad acceptance portion of this story where she’s just over all of it – including putting up with Liam!