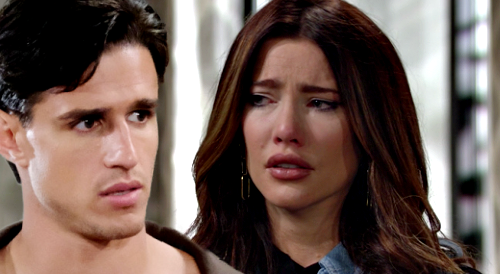 Of course, Liam will remain in Steffy’s life due to Kelly Spencer (Avalon and Collette Gray) and this new “Steam” baby. Steffy will probably acknowledge there’s no getting around that.

However, Steffy won’t want Finn and Hope thinking she’s hung up on Liam at all. As far as Steffy’s concerned, Liam will be fully out of her system.

B&B spoilers say Steffy will deliver a heartfelt apology to Hope and truly hope that “Lope” has a future together. Unfortunately, Hope will confess she’s not certain her marriage to Liam can survive due to this baby situation.

It’s a lot for Hope to move past, so Steffy will understand and await Hope’s decision along with everyone else.

Even so, Vinny can be pretty persuasive – and there’s no denying that Thomas would indeed like to have a life with Hope. The Bold and the Beautiful spoilers say Thomas will be torn about whether to accept Vinny’s guidance.

Thomas’ head should be telling him to stick to friendship, but his heart will make him wonder if Vinny’s right – if this is his big chance to finally make Hope see he’s the man for her.

Thomas will leave Vinny a message over the phone during the week of February 22-26, so he may admit he’s given the whole idea some thought.

Thomas might agree to move forward with the plan Vinny’s been trying to talk him into. He’ll at least be incredibly tempted to woo Hope, so this voicemail should make that clear. However, Thomas won’t realize that Steffy has arrived to catch part of his message.

Steffy will grow suspicious after eavesdropping, so she might hear something about Vinny’s plan and how much Thomas loves Hope. Thomas will do his best to sidestep Steffy’s questions after she busts him.

Thomas will come up with a cover story and breathe a sigh of relief when Hope’s arrival distracts Steffy from his voicemail to Vinny.

Naturally, this is something that could come back to haunt Thomas sooner or later. That’s because Vinny most likely tampered with the paternity test, which declared Finn wasn’t the father of Steffy’s baby.

Once Steffy’s suspicions about Vinny are raised, it could set the stage for his plot to unravel down the road.

Thomas obviously had nothing to do with any paternity test tampering, but he could still get blamed when this all blows up. It sounds like Thomas’ history and connection to Vinny could lead to trouble!