The Bold and the Beautiful Spoilers: Steffy Threatens Finn, Will Pull Plug On Marriage 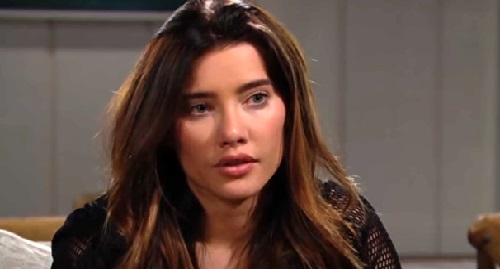 The Bold and the Beautiful (B&B) spoilers tease that Steffy Forrester (Jacqueline MacInnes Wood) may warn John “Finn” Finnegan (Tanner Novlan) that their marriage is still not official. Will Steffy bring back the marriage certificate threat to stop Sheila Carter’s (Kimberlin Brown) progress?

After Steffy and Finn’s wonderful wedding on B&B, Sheila showed up out of nowhere to derail the reception. Her news about being Finn’s birth mother kicked off plenty of drama – and that drama continues to this day since Sheila’s still hanging around Los Angeles.

Sheila believes she can gain acceptance in time and has no intention of giving up on her son. There’s nothing that would mean more to Sheila than a chance to truly bond with Finn and Hayes Forrester Finnegan (Piper Harriot).

During the week of November 29-December 3, Sheila will put a new plan in motion. She’ll show up in Finn’s office wearing scrubs, so fans will be eager to see if that’s a disguise to gain admittance or the sign of a new hospital job.

Regardless, Finn will no doubt insist that Sheila can’t be there. He may remind Sheila that he’s politely asked her to respect his wishes about putting some distance between them. Of course, Sheila might point out that those are Steffy’s wishes, not Finn’s.

Deep down, Finn wants the opportunity to ask more questions and really get to know his biological mom. Sheila will pressure Finn to follow his natural desires and perhaps make Steffy see things his way.

Sheila will also offer an apology for keeping her affair with Jack Finnegan (Ted King) a secret. She may blame Jack for the lies and how he pushed her to give Finn up, but she could also encourage Finn to let go of the past.

Sheila may think this should be a time for their family to focus on forgiveness and putting mistakes behind them. She’ll probably tell Finn that’s exactly why she urged Jack to come clean – so they could all have a real fresh start.

By the end of Sheila’s visit, Finn will feel conflicted all over again. It’ll become harder and harder for Finn to keep turning his back on Sheila. If Steffy realizes Sheila is tightening her grip on Finn, what will she do next?

Steffy may have to offer a harsh reminder that her marriage certificate wasn’t filed, so they aren’t legally husband and wife yet. If Finn ever wants that to change, he needs to find a way to put all the Sheila issues to rest.

Steffy may argue that they should be trying to get Sheila out of LA, not contemplating the idea of ever letting her in their lives. That pesky unfiled marriage certificate is sure to come back to haunt, so we’ll see if Steffy uses it as a weapon in her Sheila strategy.