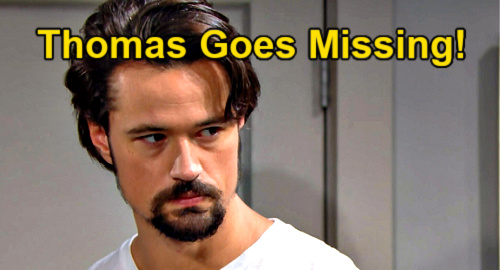 The Bold and the Beautiful (B&B) spoilers tease that Thomas Forrester (Matthew Atkinson) could disappear and leave Hope Spencer (Annika Noelle) searching for Douglas Forrester’s (Henry Joseph Samiri) missing dad. A scary outcome is coming up after a major revelation about Vinny Walker (Joe LoCicero) and how he really died, so let’s talk about what’s next.

During the week of June 21-25, B&B will expose some shocking new details related to Vinny’s case. Things aren’t quite as they seem, but The Bold and the Beautiful spoilers say the show will click some surprising puzzle pieces into place – both for viewers and for Thomas.

Liam Spencer (Scott Clifton) was locked up for killing Vinny, but someone else is apparently responsible for Vinny’s deadly fate. Thomas seems poised to find out who that someone is, so his life will be at stake.

There’ll be a few ways for the writers to take this story once Thomas learns the truth.

It’s possible Thomas will be attacked and left for dead himself. Thomas might become the next victim of the person who went after Vinny intentionally. Kidnapping might be another option, so Thomas could become someone’s hostage and end up stuck in captivity.

Either way, Thomas is likely going to be missing for a little while. If Thomas is left bleeding out somewhere, he’ll be at the mercy of whoever might come along to find him and get him to the hospital.

If Thomas is snatched and held captive, he’ll have to hope someone comes looking for him.

Regardless, Hope may worry if Thomas misses work or doesn’t show up for scheduled time with Douglas Forrester (Henry Joseph Samiri). Whether Thomas is injured or abducted, Hope may not know where he is.

We could see Hope ponder Thomas’ vanishing act and grow more concerned by the second.

Hope might alert Ridge Forrester (Thorsten Kaye), Steffy Forrester (Jacqueline MacInnes Wood) and the authorities if this goes on too long. No matter how Thomas’ ordeal plays out, there’ll be dangerous circumstances that could perhaps leave Thomas MIA.

We’ll keep you posted as other news and updates roll in. B&B spoilers say Thomas will face an ambush and more struggles, so stay tuned. CDL’s your one-stop source for terrific Bold and the Beautiful spoilers, updates and news, so stop by frequently.