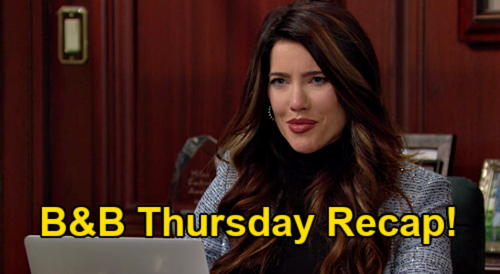 The Bold and the Beautiful spoilers recap for Thursday, February 25, reveal that it was a new day in LA, and Thomas Forrester (Matthew Atkinson) was in the Forrester CEO office leaving a message for Vinny Walker (Joe LoCicero).

As it turned out, Thomas and Vinny’s conversation from yesterday had been interrupted by a call from Douglas Forrester (Henry Joseph Samiri), and Thomas still didn’t have an answer from Vinny about the paternity test.

Thomas was leaving Vinny a voicemail message saying he needed the truth when Steffy Forrester (Jacqueline MacInnes Wood) walked in the office. Steffy noted that Thomas seemed mad at Vinny.

“What’s going on?” Steffy asked. “Is Vinny keeping something from you?” Thomas said that he was probably overreacting, and that if Vinny was up to something, he’d find out what it was.

Hope admitted that she was thinking about Steffy having Liam Spencer’s (Scott Clifton) baby.

Katie and Paris wanted to support and help Hope, as Hope said that she didn’t want to give up on her family. Still, Hope thought that it just felt like one betrayal too many, and she wished that she had a magic wand and could make John “Finn” Finnegan (Tanner Novlan) the father of Steffy’s baby.

Back in the CEO office, Steffy and Thomas continued talking, with Steffy wondering why Thomas sounded so angry at Vinny. Steffy noted that Vinny and Thomas had been friends forever, and that Vinny would do anything for him. “That could be the problem,” Thomas said, as Hope walked in.

Thomas took the opportunity to slip out, texting Vinny as he did. Hope told Steffy that she was glowing, and after a little talk about morning sickness, both Hope and Steffy agreed that they wanted the baby to be happy and healthy. Steffy apologized to Hope for turning her whole world upside down.

Over at Spencer Publications, Wyatt Spencer (Darin Brooks) talked with Flo Fulton (Katrina Bowden), who expressed an interest in reaching out to Hope.

Flo lamented that she wasn’t fully embraced by her family, and together she and Wyatt rehashed how she helped keep Beth Spencer (River Davidson and Madeline Valdez) from Liam Spencer (Scott Clifton) and Hope.

Wyatt thought that Flo made up for a lot by giving Katie her kidney. Flo said that she thought that she would be closer to Hope and the Logan sisters by now.

Wyatt thought that Donna Logan (Jennifer Gareis), Brooke Forrester (Katherine Kelly Lang), Hope, and Katie would come around. Flo thought that getting closer to the Logans would help her feel closer to her father Storm Logan (William deVry).

Later, Wyatt showed up at Forrester Creations, where he found Katie in the design office. Katie immediately suspected that Bill Spencer (Don Diamont) sent Wyatt, but Wyatt said that he was there for someone else. “It’s about someone who loves you and is part of your family,” Wyatt said.

In the Forrester Creations backstage area, Thomas called Vinny, who answered from the hospital lab. “What the hell, I’ve been calling you nonstop!” Thomas fumed. “Tell me the truth – Did you mess with Steffy’s paternity test results?” Thomas bellowed. Just then, Paris walked by but didn’t overhear.

Thomas told Vinny that they needed privacy, and he demanded that they meet at Vinny’s place. Vinny balked, but eventually agreed to meet and then hung up on Thomas. Thomas looked upset, while on his end, Vinny looked worried.

B&B is getting great, so be sure to tune in tomorrow! Stick with us here at CDL for all your soap news and spoilers. We’re your go-to place for the latest Bold and the Beautiful updates.