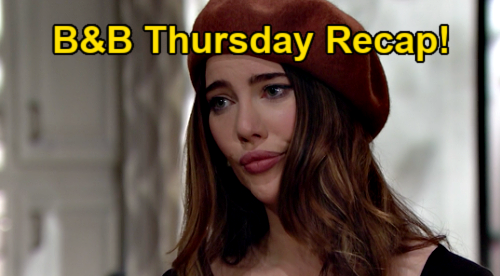 Liam disclosed that he told Hope Spencer (Annika Noelle) everything, and Steffy said that she told John “Finn” Finnegan (Tanner Novlan), too.

Steffy said miserably that Finn was excited at the thought of becoming a father, but that it was a lot to deal with. Liam suggested that Steffy give Finn time, and Steffy said that she was afraid that Finn would leave her if the baby wasn’t his.

Steffy then asked where Hope and Liam stood in their relationship.

Liam relayed that Hope was shattered, but that she was willing to try to move forward because of the kids. “Then I had to tell her you were pregnant,” Liam whined. “I don’t think we’ll make it if I’m the father.” Steffy said that Finn and Hope deserved to know whose baby she was carrying.

Steffy then headed to work, and Liam went into Kelly Spencer’s (Colette and Avalon Gray) room to leave something there for her. As Liam returned to the main room, he gazed at the portrait on the wall, and then Finn walked in from the side door.

Finn was immediately put off and asked Liam what he was doing there, and before Liam could explain, Finn launched into a tirade.

Finn blasted Liam for not confronting Thomas Forrester (Matthew Atkinson) when he thought Thomas was kissing Hope. Finn continued ranting about how Liam overreacted and drove right to Steffy’s house.

Liam tried to get a word in edgewise, saying that he wasn’t looking for a reason to spend the night with Steffy.

“You sure about that?” Finn snipped. “You wanted Steffy – that’s why you came over here,” Finn fumed, saying that Liam was probably looking for an excuse for years.

“You only cared about yourself,” Finn bellowed, pointing out that Liam didn’t even stop to consider Hope or Steffy’s feelings in the matter. Liam looked stunned.

Meanwhile, at Brooke Forrester’s (Katherine Kelly Lang) mansion, Hope was drinking a rather large mug of coffee when Brooke entered the room.

Brooke gushed about how Hope and Liam were great parents and how they were doing a lot raising Beth Spencer (River Davidson and Madeline Valdez) and Douglas Forrester (Henry Joseph Samiri).

Hope seemed uncomfortable with the conversation, and she asked Brooke to stop talking like she was perfect. Brooke went on, saying that this should be a peaceful time with Hope and Liam, then she noticed that something seemed to be wrong with Hope.

Hope covered, saying that she was just thinking about her family. Brooke gushed that Hope and Liam had overcome so many obstacles.

Hope said that she was afraid to get comfortable with the situation, but then she finally let go and got thrown a curve ball. Brooke thought that Hope was talking about Thomas’ injury, and Hope didn’t correct her. Soon, Hope left for Forrester Creations.

In the Forrester Creations CEO office, Thomas was working when Vinny Walker (Joe LoCicero) walked in. Vinny was happy to see Thomas and said that he had been very worried about him.

Thomas credited Hope with making sure that he got to the hospital, and he told Vinny that he was even trying to be more accepting of Liam.

Vinny’s phone rang, and when he pulled his phone out of his jacket, a bottle of unlabeled pills fell out and hit the floor. Thomas didn’t seem to notice.

Vinny and Thomas talked about Liam a bit more, and Hope walked up to the door just in time to overhear Liam tell Vinny that Hope deserves someone who’s committed to her and only her.

Hope then walked into the office and Vinny took off in short order. Hope said that she was surprised to see Thomas at work, and Thomas went on about how he wanted to do a capsule collection for a department store, but Hope seemed to be a million miles away. Thomas wondered what was wrong.

Just then, Steffy walked in and Hope reacted. Hope asked for a moment alone with Steffy, and Thomas took off. Steffy immediately apologized to Hope, saying that the whole thing had been a huge misunderstanding.

Hope blasted Steffy for having that giant picture of her and Liam in the cliff house, and she sarcastically congratulated Steffy on her pregnancy.

“My marriage and my family might be destroyed,” Hope fumed. “Admit it – you finally got what you wanted – another chance with my husband!”

That was a great episode of B&B, and there’s plenty more coming tomorrow, so stay tuned! Check back with us often for the latest Bold and the Beautiful spoilers, updates, and news. Here at CDL, we’ve got you covered!