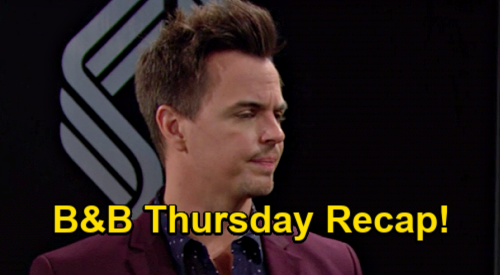 Steffy said that she hated it that she was unfaithful, and Finn said that he needed to know where he stood. Finn asked Steffy who she wanted to be the father of her baby.

Steffy said that she felt like a failure because of the situation with Hope Spencer (Annika Noelle) and Liam Spencer (Scott Clifton) and she wanted to break the cycle and be transparent with Finn from this point forward.

“I hurt you – I let you down,” Steffy lamented, saying that Finn gave her freedom from the craziness with Hope and Liam.

Finn asked why Steffy wanted to be with him, and Steffy rattled off a bunch of nice reasons why, including how Finn is with Kelly Spencer (Colette and Avalon Gray).

“I want that for this child – our child,” Steffy said earnestly. “If I’m the father,” Finn said. “That’s what I want,” Steffy insisted. “I want you to be the father of this child.” Finn smiled happily and hopefully, and he said that he needed brutal honesty from Steffy.

“Is that what you want?” Steffy asked. Finn didn’t immediately answer, and Steffy sadly said that if he wanted to leave, she’d understand.

Finn walked toward the door, and Steffy started crying, but then Finn shut the door and said that he believed that what happened with Liam wouldn’t happen again.

“What are you saying?” Steffy asked. Finn then said that he loved Steffy and that he wanted her child to be his. “I’m going to believe that it is,” Steffy said, crying happily.

Meanwhile, Hope and Thomas Forrester (Matthew Atkinson) entered the cabin, which Hope said was more private than the main house.

Thomas reeled from the news about Steffy and Liam’s cheating and Steffy’s pregnancy, and he said that he hated that Hope was going through this. Hope said that she felt terribly for Finn.

Thomas said sadly that he tried to warn Finn about Liam, and he said that none of this was Hope’s fault. Hope worried that Liam might cheat again, and she lamented that Liam knew that it could destroy their family, and that he did it anyway.

Thomas said that drinking wasn’t an excuse, and that it must feel like deja vu for Hope.

Hope said that she didn’t want to hear that Thomas was right about Liam all along. “That’s not what I’m saying,” Thomas said gently, saying that he felt like this was his fault.

Thomas said that he cared about Hope, and he said that it’s clear that Liam loves Hope. “Take it one step at a time,” Thomas urged, “And cross that bridge with Liam.”

Hope wondered what Thomas was trying to say, and Thomas said that Liam was clearly sorry for what he did and that he loved Hope. “Maybe you should give him another chance,” Thomas urged.

Over at Spencer Publications, Liam was yelling at someone on the phone attempting to do a business deal when Wyatt Spencer (Darin Brooks) and Flo Fulton (Katrina Bowden) walked in the office.

Wyatt could immediately tell that something was wrong with Liam, and he and Flo assumed that it had to do with Thomas living at Brooke Forrester’s (Katherine Kelly Lang) place.

Flo then realized that Wyatt and Liam may need to talk privately, and she took off. “Ok, it’s just us, out with it,” Wyatt pressed. Liam said it was about Steffy, and he sat down to eat his lunch, which Wyatt noticed was a roast beef sandwich.

Wyatt freaked out over Liam eating meat, and Liam lamented that he hurt Hope in the worst possible way.

Wyatt then figured out that Liam and Steffy had slept together, and Wyatt went bonkers. “No, not you and Steffy!” Wyatt wailed. “And that’s not all – she’s pregnant,” Liam said miserably.

“It’s either mine or Finn’s.” Wyatt reeled and Liam said that he threw it all away because that’s what he does best.

That was a terrific episode of B&B, and there’s much more coming up on the show tomorrow, so be sure to tune in! We’ll keep you up to speed on all the hot new Bold and the Beautiful spoilers and news. Here at CDL, we’ve got you covered!