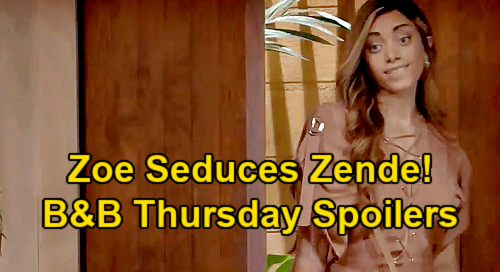 The Bold and the Beautiful spoilers for Thursday, January 28, tease that Bill Spencer (Don Diamont) will be feeling hopeful. As B&B viewers know, Bill has just had a promising conversation with Katie Logan (Heather Tom), during which Katie indicated that she might be willing to take Bill back.

Katie didn’t commit to a reunion, but she definitely gave Bill hope, and he’ll probably be feeling pretty good.

B&B spoilers indicate that Bill will talk with Wyatt Spencer (Darin Brooks) about the whole situation, and he’ll probably relay his conversation with Katie and what it could mean.

Chances are, Wyatt will tell his father not to get his hopes up, but it may be too late for that. Bill really wants Katie back, and he’ll take this ray of hope as a promising sign.

Look for Wyatt to try to ground Bill a bit on Thursday’s episode of B&B, while Katie goes to see Donna Logan (Jennifer Gareis) for some sisterly advice. It looks like Katie’s talk with Bill will spur her to really consider taking Bill back, but she’ll want to get another woman’s perspective on the matter.

We’ll see what Donna has to say, but chances are, she’ll tell Katie to look deep into her heart for answers.

Meanwhile, on the new episode of B&B on Thursday, January 28, Zoe Buckingham (Kiara Barnes) will pull out all the stops to see how Zende Forrester Dominguez (Delon de Metz) really feels about her.

As B&B viewers know, Zoe showed up unexpectedly at the Forrester mansion, where Zende was about to take a swim in the pool.

Well, Zoe has started the process of basically throwing herself at Zende, as she’s strongly insinuated that she should join him for a swim even though she has no swimsuit with her.

Zende seems really uncomfortable with the whole scene, and he’s continuing to insist that Zoe’s engaged and that this is all very wrong.

On Thursday’s episode, look for Zoe to continue to press Zende to explore what things could be like if they were together as a couple. Might Zoe actually be successful in getting into the Forrester pool with Zende?

Or will Zoe kiss or attempt to kiss Zende? B&B spoilers say that Zoe will come on very strong, so we’ll see if Zende’s able to resist.

Ongoing spoilers for later this week say that Ridge Forrester (Thorsten Kaye) will eventually burst in and catch Zoe and Zende together, so it seems that Zoe might just be successful at wearing Zende down.

Look for Zoe’s seduction attempt to be in full force on Thursday’s episode – it doesn’t look like she’s going to take no for an answer!

Thursday’s episode of B&B sounds great, so be sure to stay. tuned. Stick with the CBS soap and check in with CDL frequently for the latest Bold and the Beautiful spoilers, updates, and news. We’ve got you covered!

Fill your week with style, fun, and plenty of drama! 👏 #BoldandBeautiful is new weekdays on @CBS and CBS All Access. pic.twitter.com/6p6jqlYIma