The Bold and the Beautiful Spoilers: Thursday, March 4 – Zende & Paris’ Whirlwind Date – Zoe Pulls Out All The Stops For Carter 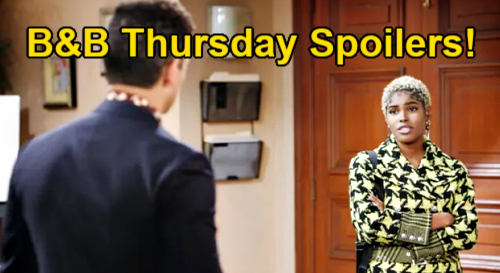 The Bold and the Beautiful spoilers for Thursday, March 4, tease that Zoe Buckingham (Kiara Barnes) will be on a mission. As B&B viewers know, Zoe has just told Carter Walton (Lawrence Saint-Victor) that she’s sorry for her flirtations with Zende Forrester Dominguez (Delon de Metz), and that she’s willing to do whatever it takes to win him back and prove that she’s trustworthy again.

Well, on Thursday’s episode, it appears that Zoe will have a romantic setup all set out at Carter’s loft, in the hopes that she’ll be able to prove to Carter that she’s serious about making things right between them once again.

Plus, Zoe will probably figure that it won’t hurt to remind Carter just how great they once were together – hence the romantic setup.

We’ll see if Carter ends up going for any of what Zoe tries selling on Thursday’s episode. As B&B viewers know, Carter is really hurt over Zoe’s betrayal, and he can’t seem to get beyond the fact that Zoe threw herself at Zende in such a blatant way.

Might Zoe’s attempt to romance Carter actually backfire? If Carter thinks that Zoe is using intimacy as a way to get him back, then it just might!

Meanwhile, on the new episode of B&B on Thursday, March 4, Zende will be moving on from the Zoe/Carter situation in a very big way.

As B&B viewers will remember, Zende has just told Paris Buckingham (Diamond White) that he’s glad that she decided to stay in Los Angeles and take the Forrester Foundation job at the company.

Well, it seems that Zende will decide to take Paris out for some fun outside the office. This could be Zende and Paris’ first official date, given that B&B spoilers say that it will be a whirlwind of fun and romance.

We’ll see what Zende has in store for Paris, but it looks like the two will have a good time together.

One wonders how Paris will ultimately see this outing between herself and Zende. Paris likes Zende for sure, but she’s also appropriately cautious, especially given everything that went down between him and Zoe not too long ago.

Paris might just tell Zende that she wants to take things slowly despite their fun day together!

Thursday’s episode of B&B is going to be terrific! Be sure to tune in, and don’t miss out ongoing Bold and the Beautiful spoilers, updates, and news. Check out our daily episode recaps as well!