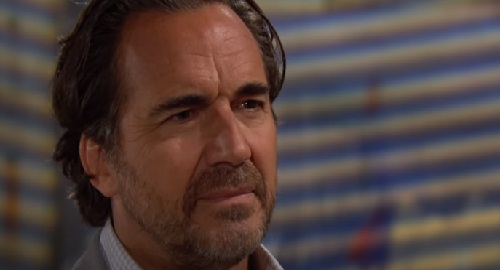 The Bold and the Beautiful (B&B) spoilers for Thursday, September 30, tease that Ridge Forrester (Thorsten Kaye) will push Eric Forrester (John McCook) to leave his cheating wife – and the arrangement Eric made with Quinn and Carter Walton (Lawrence Saint-Victor) will be revealed.

First on Thursday’s B&B episode, Eric will come clean to Katie Logan (Heather Tom) about not being able to satisfy Quinn in the bedroom. He’ll explain how heartbroken that’s made him and how he couldn’t just let Quinn go unfulfilled.

Eric will discuss how his ED has affected his marriage and will admit he arranged it so Quinn could sleep with Carter on the side. Although Eric will know that’s unconventional, he’ll feel like it’s what Quinn deserves.

Of course, Katie may wonder if it’s what Eric deserves considering he’s so miserable, but fulfilling his wife will still be Eric’s priority. In the meantime, Ridge will refuse to believe Eric gave Quinn and Carter permission to sleep together. He’ll think this is just some excuse the cheaters are using to avoid consequences.

Ridge will insist that Eric forgave Quinn and got betrayed all over again. He’ll lash out at Quinn for being a lousy wife and will feel like Eric can do so much better. No matter how hard Carter and Quinn try to explain, Ridge just won’t be able to fathom how Eric could approve that kind of arrangement.

However, Eric will have a chance to confirm the news soon enough. Ridge will eventually call out the betrayal in front of both Quinn and Eric. He’ll want Eric to hear what went down so he can kick Quinn to the curb!

Ridge will ultimately tell Eric that his wife’s been in Carter’s bed, but Eric will admit he sent her there. At that point, Eric will feel he has no choice but to confess his condition and explain how he couldn’t satisfy Quinn in the same way anymore.

It’ll be embarrassing for Eric to keep spreading the word, but he’ll do his best to take the heat off Quinn and Carter. Naturally, Ridge will struggle to wrap his head around Eric’s crazy solution. He won’t be happy with Carter and Quinn for going along with it either, so there’ll be so much more to discuss.