The Bold and the Beautiful Spoilers: Tuesday, January 12 Recap – Hope Forgives Liam – Finn Not Sure About Steffy Future 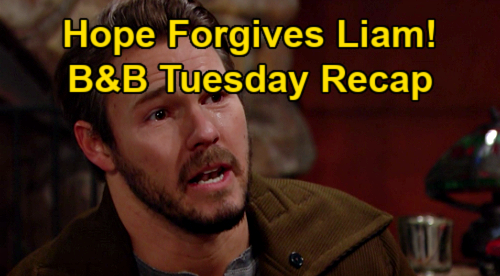 The Bold and the Beautiful spoilers recap for Tuesday, January 12, reveal that Liam Spencer (Scott Clifton) pled with Hope Spencer (Annika Noelle) at the cabin, urging her to find a way to forgive him.

Liam got on his knees and begged with Hope, as Hope stayed stoic and silent. Liam cried, saying he wanted their future together.

Hope said that she didn’t want to lose their future, but that she didn’t know how she was supposed to forgive Liam for cheating with Steffy Forrester (Jacqueline MacInnes Wood). “Given the history that the three of us share, it’s like a knife,” Hope said. Liam begged Hope to let him try to make things up to her.

Hope said that she believed that Liam loved her and that he was sorry for what happened, but that he loved Steffy, too. Hope went on, saying that she didn’t care if Liam was drinking, since he knew the issues that she had with Steffy.

Hope then accused Liam of wanting his family with Steffy. “No, I only want you,” Liam insisted.

“Then why do you always turn to Steffy?” Hope asked, crying. “You don’t make love to your ex unless you miss her, and you want to be with her.” Liam said that Hope was his wife, and that he wanted to prove his devotion and commitment to her – if Hope would give him that chance.

Hope then said that at least Liam was honest and told the truth and that their family meant everything to her. “So, I will try for our children – for their future – but that is all I can offer you. And it can never happen again,” Hope said quietly. Liam assured Hope that it would never happen again.

Hope said that she had a question, and she asked why Liam had decided to come clean now. Liam looked miserable, and he said that there was one other thing that Hope needed to know, and that it was big. Hope looked wary as Liam said that it may not be possible never to think about that night again.

Meanwhile, over at the cliff house, John “Finn” Finnegan (Tanner Novlan) tried to process the fact that Steffy slept with Liam. “I’m not sure what you want me to say,” Finn said. “What am I supposed to do with that, especially with that picture always staring down at me?”

Steffy said that she and Liam were drinking, and that it wouldn’t have happened otherwise. “You sure about that?” Finn asked. “Liam needed you, so you slept with him,” Finn said matter-of-factly.

Finn said that the question now was what this all meant for them. “Do you still love Liam? Do you want your ex-husband?” Finn asked.

Steffy said no, and that while she’d always care about Liam, she knew for sure that she wanted Finn in her future. “I care about you, Finn,” Steffy said. “I can’t lose you. Will you forgive me?” Finn looked at Steffy very seriously, as if he didn’t know the answer himself.

At Forrester Creations, Paris Buckingham (Diamond White) and Donna Logan (Jennifer Gareis) gushed together backstage, and it was revealed that Paris had just talked to Ridge Forrester (Thorsten Kaye) and that she accepted the job offer with the Forrester Foundation.

Donna thought that Zoe Buckingham (Kiara Barnes) would be thrilled with the news.

Just then, Zoe walked in and overheard. Donna said that Zoe was looking at Forrester Creations’ latest hire…Paris! Donna skedaddled, and Zoe immediately started in on Paris wanting some answers.

“I thought you were turning down Ridge’s offer – what happened?” Zoe demanded. “Why would you go against me?”

Paris said that this was the opportunity of a lifetime, and she asked Zoe to meet her halfway. “What’s the sudden flip flop?” Zoe demanded, and then she figured out that Zende Forrester Dominguez (Delon de Metz) must have gotten Paris to change her mind.

Paris admitted that it was true, and she wondered why Zoe was reacting like this.

Zoe said that Paris was disrespecting her, and Paris said that Zende had been so persuasive and that no man had ever said such nice things to her. “I want this chance, and a chance with Zende, too,” Paris said enthusiastically.

Zoe reminded Paris that Zende was coming off a divorce, and then Paris disclosed that she kissed Zende. Zoe looked horrified.

That was a terrific episode of B&B, and you won’t want to miss tomorrow’s episode, so stay tuned! Here at CDL, we’ll keep you current on all the latest Bold and the Beautiful spoilers and hot news.