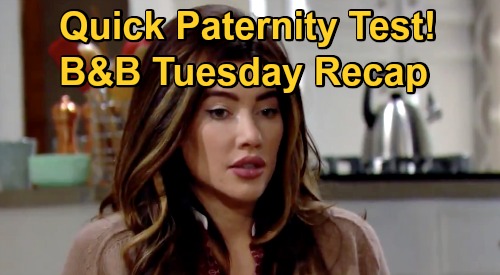 The Bold and the Beautiful spoilers recap for Tuesday, January 5, reveal that Steffy Forrester (Jacqueline MacInnes Wood) and Liam Spencer (Scott Clifton) continued their tense conversation at the cliff house.

Steffy paced, insisting that the baby had to be John “Finn” Finnegan’s (Tanner Novlan). “This could change our lives forever,” Steffy said.

Liam lamented about shattering his vows to Hope Spencer (Annika Noelle), and he and Steffy rehashed everything that happened leading up to them sleeping together.

Steffy reiterated that the baby just had to be Finn’s. “You’ve got to see why we can’t wait,” Liam said. “I’ve got to talk to Hope.” That led Steffy to start yelling at Liam about all the reasons why he shouldn’t tell Hope.

Steffy argued that Liam was going to destroy his family with Beth Spencer (River Davidson and Madeline Valdez) and Douglas Forrester (Henry Joseph Samiri) if he told Hope. “Don’t tell her!” Steffy fumed. “You can’t!” Steffy went on, telling Liam to control himself, at least until they know that Finn is the father.

Liam disagreed, arguing that even if the paternity test came out such that Finn was the father, it didn’t erase what they did, and what he did to Hope. “How could I do that?” Liam wailed. “Look me in the eye and tell me how I did that to Hope!”

Hope said that they didn’t need to get into the details, but Thomas said that he could own what he did. Hope reminded Thomas that there was a medical reason for his actions.

Thomas didn’t like it that Liam thought that Hope was cheating, and he noted that Liam must have been very upset. Hope thought it was interesting that Thomas cared about how Liam feels, and she reiterated that it wasn’t Thomas’ fault that he kissed the mannequin.

Thomas said that he feels terrible thinking that Hope and Liam were having problems because of him.

Soon, Hope checked her phone again, and Thomas said that he hoped that Liam wasn’t being a “waffle.” Hope wasn’t impressed, and Thomas apologized for his words, insisting that the old Thomas was gone.

Thomas said that he still loved Hope, but how he loves Hope has changed and that he’s no longer obsessed. “I’ve moved forward, and I accept your marriage to Liam,” Thomas said.

Zende wondered what was going on, and Zoe said that she was thinking about Paris Buckingham (Diamond White). Zoe made some vague comment about how Paris was anxious to get out there and do her own thing, and that she needed a place to land.

Zende wondered if that place might just be there in Los Angeles, and Zoe didn’t look thrilled about that. Meanwhile, over in the CEO office, Paris arrived to see Ridge Forrester (Thorsten Kaye) but she found Carter Walton (Lawrence Saint-Victor) instead.

Paris looked mopey, and she told Carter that she was turning down the Forrester Foundation job. Carter said that he was sorry about that, and he wondered if there was a way that Paris and Zoe could work things out.

Carter said that Forrester Foundation job was the opportunity of a lifetime, and Paris said that it might not be the perfect fit. “For you or for Zoe?” Carter asked. “You could regret this for the rest of your life.”

Later, Carter was alone in the CEO office when Zoe walked in. After a little flirting and small talk, Carter said that he had talked to Paris, and that Paris was turning down the job. Carter noted that it appeared that Zoe had gotten her way.

Back in the design office, Zende was working alone when Paris walked in all droopy. Zende wondered what was going on, and Paris said that she had come to say goodbye.

“Are you taking a trip?” Zende asked. Paris said that she wouldn’t be coming around Forrester Creations anymore. Zende was stunned.

“If it isn’t obvious, I really hate this,” Zende said gently. “We were just getting to know each other.” Zende said that he’d miss Paris, and he asked if Paris was sure that she wouldn’t reconsider.

There’s a lot of B&B drama heating up, so stay tuned! Stick with the CBS soap and don’t forget to check CDL frequently for the latest Bold and the Beautiful spoilers, daily episode recaps, and news.