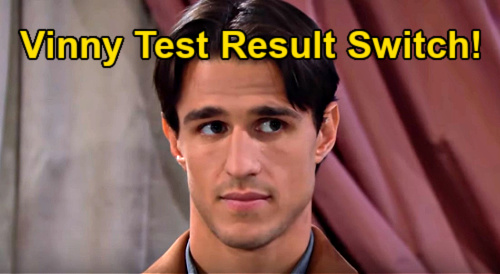 The Bold and the Beautiful (B&B) spoilers tease that it will be a big week on the CBS soap, as the results of Steffy Forrester’s (Jacqueline MacInnes Wood) paternity test will be in.

As B&B viewers know, Steffy and John “Finn” Finnegan (Tanner Novlan) each provided samples for the paternity test, and they should get a simple yes/no answer from Dr. Campbell (Tina Huang) as to whether Finn’s the father of the baby.

That all sounds nice and straightforward, but there seems to be someone who may want to alter that test result…all to help out a friend.

Recently, Vinny Walker (Joe LoCicero) was visiting with Thomas Forrester (Matthew Atkinson), and Thomas filled Vinny in on the fact that Steffy had just gotten a paternity test underway.

Vinny immediately perked up and made a very telling comment.

Specifically, after learning about just how much was riding on the paternity test, Vinny mused that if the test showed that Liam Spencer (Scott Clifton) was the baby’s father, then Hope Spencer (Annika Noelle) would probably leave Liam, freeing her up to be with Thomas.

Of course, Thomas didn’t encourage Vinny in this line of thinking, but you could really see the wheels turning in Vinny’s head.

But there’s something else about Vinny that has been made very clear on more than one occasion lately, and that’s that Vinny is still very much using illegal drugs.

Viewers will remember that Vinny is the one who gave Steffy her illegal pills back when she was becoming addicted, and he’s apparently a frequent user himself.

Well, what if Vinny pops a pill or two and then heads over to the hospital to alter the paternity test results? Vinny could do the whole paternity switch in a drugged haze and not even remember doing it later.

Vinny could conceivably alter the results even if he’s not that coherent, since it would only be a matter of changing a “yes” to a “no” to make it look like Liam is the father.

We’ll see what happens here, but all signs seem to be pointing to Vinny doing a paternity test switch in order to try to help his buddy Thomas out.

But if Vinny does it all under the influence of drugs and he doesn’t remember what he did, then it might be a while before anyone finds out about the switch!

What do you think – will Vinny switch the paternity test results? Stay tuned to B&B and we’ll be sure to keep you up to speed on the latest Bold and the Beautiful spoilers, updates, and news. Here at CDL, we’ve got you covered!