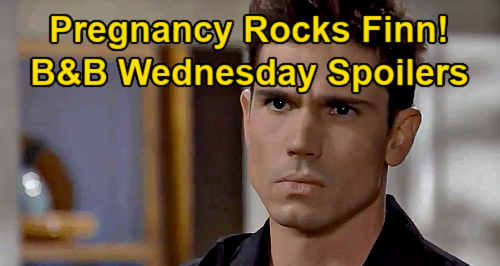 The Bold and the Beautiful spoilers for Wednesday, January 13, tease that Hope Spencer (Annika Noelle) is about to get a huge shocker. As B&B viewers know, Liam Spencer (Scott Clifton) has just told Hope that there’s something else that she needs to know about his affair with Steffy Forrester (Jacqueline MacInnes Wood), and that it’s something big.

Well, something tells us that Hope’s not going to be so willing to try to forgive any longer, once she learns that Steffy is pregnant and that Liam could potentially be the father of the baby. In fact, that might be the last straw for Hope, as she realizes that there could be another “Steam” baby on the way.

And over at the cliff house, Steffy’s going to have a similar conversation with John “Finn” Finnegan (Tanner Novlan). Of course, Steffy has just done her best to convince Finn that she doesn’t want Liam back, and that she loves and wants a future with him. Finn seems like he’s on the verge of believing Steffy.

It’s probably only a matter of time before Finn asks Steffy the inevitable question that Hope asked Liam – why she decided to come clean now. Then Steffy will have to fess up and reveal that she’s pregnant and that she doesn’t know who the father is. Finn’s surely going to be stunned by the whole thing.

Of course, the revelation of Steffy’s pregnancy is probably going to make both Hope and Finn feel that Liam and Steffy only came clean about their affair because they had to do so. Look for Liam and Steffy’s hopes for a relatively quick reconciliation with their partners to be dashed rapidly.

Meanwhile, on the new episode of B&B on Wednesday, January 13, Zoe Buckingham (Kiara Barnes) is going to be rocked by what she’s just heard from her little sister Paris Buckingham (Diamond White).

As B&B viewers know, Paris has just revealed that she and Zende Forrester Dominguez (Delon de Metz) kissed, and Zoe’s not happy about it.

Of course, underlying Zoe’s rage will be the fact that she herself is attracted to Zende, so there will be a big jealously element to this conflict. Look for Paris and Zoe to get into a heated argument over Paris accepting the Forrester Foundation job and over her burgeoning relationship with Zende.

One wonders if Zoe will let it slip that she has feelings for Zende during the argument. Whatever the case, B&B spoilers say that the sibling rivalry between Zoe and Paris will go to the next level, so there should be some major fireworks for sure!

Wednesday’s episode of B&B is going to be amazing, so be sure to tune in! We’ll keep you abreast of all the latest Bold and the Beautiful spoilers, updates, and news. Here at CDL, you can count on us!