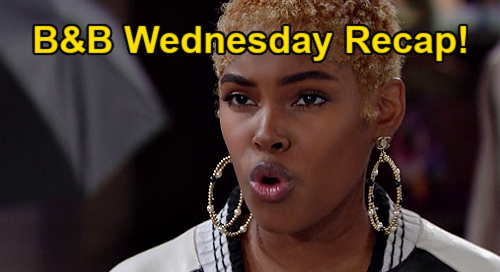 Bill asked Katie to let him in, and he said that he could do better for her and for their family. Katie looked conflicted and said that she had trusted Bill too many times.

“I hate myself for hurting you,” Bill said, noting that he had clarity now and knows what’s important to him in life. “I know you still love me too,” Bill insisted. Bill said that he would keep asking Katie for another chance, and Katie said that she wished things could go back to normal.

Bill said that he hoped that this time apart would make Katie miss him too. Bill referenced the day they got married in the park, and how Katie had brought Will Spencer (Finnegan George) into the world.

“I almost lost you twice, and I’m not going to lose you now,” Bill said through tears. “I want you back – tell me you want that, too,” Bill pled.

Katie said that Bill was good with his apologies, but that she wished they weren’t always directed at her. “Yes, I miss you,” Katie said, noting that she also remembered Bill’s kiss with Brooke Forrester (Katherine Kelly Lang). “I don’t know if I can trust you with my heart ever again,” Katie lamented.

Bill asked Katie not to give up on them, but Katie fired back that this is what Bill has done over and over. Bill continued on, saying that he needs Katie, and that Katie needs him too.

“How can I ever trust you again?” Katie asked. “I hear you and I believe you’re sincere,” Katie said earnestly.

“If there’s a chance for us, you have to prove that you’re worthy of love and trust,” Katie continued, noting that she had to be 100% certain that she’s the love of Bill’s life. Katie said that she deserved to be loved, respected, wanted, and cherished. Bill agreed, and he said that Katie would be…by him.

Paris fumed that Zoe was playing both Carter Walton (Lawrence Saint-Victor) and Zende Forrester Dominguez (Delon de Metz). “It’s tacky and disrespectful to Carter and to me,” Paris said.

Zoe said that she had given it a lot of thought, and that she needed to see where things stand with Zende before she marries Carter. Paris thought that Zoe should tell Carter about this, but Zoe balked, saying it would freak Carter out needlessly.

“You won’t be saying or doing anything about this, do you understand me?” Zoe told Paris.

Over in the CEO office, Ridge Forrester (Thorsten Kaye) continued his conversation with Zende. Ridge danced around the issue, saying that Carter was giddy in love, and that he deserved a wife who wasn’t looking at other men. Zende wholeheartedly agreed. “Good,” Ridge said.

Ridge continued, saying that he wanted to make sure that Zoe didn’t want to be with someone else. Just then, Zoe called Zende from the backstage area wanting to finish their conversation.

Zende brushed Zoe off, saying that he was going to spend the evening alone at the Forrester mansion.

Back in the backstage area, Zoe hung up with Zende, and Paris asked what Zoe was up to. Zoe didn’t say, and Paris again blasted her sister for flirting with Zende while being engaged to Carter.

“This is why I didn’t want you working here!” Zoe fumed, and Paris said that this whole thing was going to blow up in Zoe’s face.

Zoe then told Paris to stay away from Zende or she’d make sure that Paris got fired since she was engaged to the COO. Zoe took off angry. Paris went back in the direction of the CEO office, where Ridge caught her wanting to finish their conversation about Zoe.

Ridge asked Paris if Zoe was as committed to Carter as he was to her.

At the Forrester mansion, Zende got ready for a swim and reminisced about Zoe. Just then, Zoe walked in saying that Zende mentioned that he’d be here alone, and that it must have been an invitation.

“I’m here to keep you company,” Zoe said. Zende looked conflicted and said that he was about to take a swim.

“I didn’t bring anything to wear, but we shouldn’t let that stop us,” Zoe cooed. Zende asked what Zoe was really doing there, and he pointed out again that Zoe was engaged.

Zoe offered to take her ring off if it bothered Zende, and Zende was incredulous. Zoe said that they owed it to themselves to see where this led.

Keep on tuning into B&B for all the great drama, and we’ll keep you updated as more B&B news comes in. Here at CDL, we’ve got all the latest Bold and the Beautiful spoilers, daily episode recaps, and news.