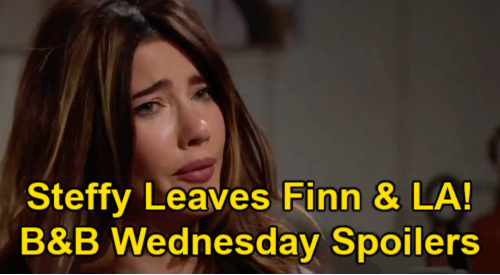 The Bold and the Beautiful spoilers for Wednesday, March 10, tease that it could be the end of the line for Vinny Walker (Joe LoCicero) and his gig at the lab. As B&B viewers know, John “Finn” Finnegan (Tanner Novlan) has just burst into the lab after overhearing Thomas Forrester (Matthew Atkinson) ask Vinny if he altered the paternity test results to make it look like Liam Spencer (Scott Clifton) was the father.

Well, chances are, Vinny’s not going to give up what he did quickly. Vinny really wants Thomas to have a chance with Hope Spencer (Annika Noelle), plus he doesn’t want to lose his lucrative job in the lab, so he’s probably going to lie through his teeth…at least initially.

But something tells us that there’s just no way that Finn is going to let Vinny leave the lab without divulging the full, honest truth.

And since B&B spoilers indicate that Vinny did change Steffy Forrester’s (Jacqueline MacInnes Wood) paternity test results and that the truth will come out this week, it’s only a matter of time before Vinny cracks and admits to what he did.

Of course, whether this happens during Wednesday’s episode or not remains to be seen, so B&B viewers are going to want to tune in on Wednesday for sure.

Meanwhile, on the new episode of B&B on Wednesday, March 10, Steffy will be over at Forrester Creations doing some serious soul-searching. Steffy seems to be feeling increasingly guilty about what she’s been putting Finn through, and the fact that she’s supposedly carrying Liam’s baby.

Steffy has been doing a lot of sighing and staring off into space, as if she’s rethinking things big time.

Well, on Wednesday’s episode, Steffy will make a life-changing decision that will apparently send her heading out of town later in the week. It certainly sounds like Steffy is going to decide to pack up and head out of town, to create distance between herself, Liam, and Hope, and to break things off with Finn.

This may be a situation in which Steffy doesn’t really want to leave Finn, but she feels like the situation would be better for him if they broke up.

Whatever happens, B&B spoilers say that Ridge Forrester (Thorsten Kaye) is going to be stunned to hear Steffy’s decision, so it’s definitely going to be something drastic.

Finally, Hope will still be feeling deep pain regarding her situation with Liam. Brooke Forrester (Katherine Kelly Lang) will be on the scene to help Hope as she continues to process the state of her marriage and the hurt that she feels about Steffy having yet another child with Liam.

Look for Brooke to extend her support to Hope, who will surely confide in her mother about her feelings of impending doom about her marriage to Liam.

Hope just doesn’t seem like she can get past Liam’s betrayal, so we may see Brooke urge Hope not to give up just yet and to think about how much her family means to her. We’ll see if Hope shows any signs of wanting her marriage with Liam to continue.

Wednesday’s episode is going to be fantastic, so don’t miss it! Keep on coming back to CDL so you don’t miss any of our Bold and the Beautiful spoilers, updates, or news.