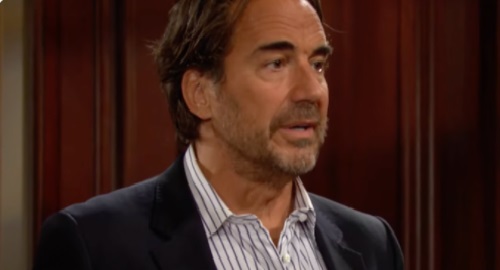 At Forrester Creations on Wednesday’s B&B episode, Quinn still thought it felt wrong to be with Carter Walton (Lawrence Saint-Victor) on the side, but she knew it was what Eric Forrester (John McCook) pushed for. Both Carter and Quinn wanted this, too.

Carter and Quinn acknowledged that they had to be careful, particularly since Ridge and Brooke Forrester (Katherine Kelly Lang) wouldn’t understand. Quinn confessed she didn’t even understand herself!

Talk turned to Quinn’s awkward conversation with Eric in the aftermath of her encounter with Carter. Quinn pointed out that Eric wanted her to be fulfilled – and Carter fulfilled her like no man ever had before.

Quinn also mentioned bringing Shauna Fulton (Denise Richards) in the loop, but she insisted they had to keep everyone else in the dark. She didn’t want to embarrass or humiliate Eric in any way.

Quinn was conflicted since she was in love with two very different men. There was Eric – her husband, partner and love. There was also Carter – Quinn’s friend, confidant and lover. After Quinn kissed Carter passionately, she wondered if this was too good to be true.

In the main office, Katie Logan (Heather Tom) ranted about Quinn to Brooke before deciding to visit Eric again. Brooke filled in Ridge, who suggested he could deal with Quinn and Eric’s reunion if they couldn’t keep their hands off each other.

Since that wasn’t happening, Ridge couldn’t make sense of this and thought it was absurd for Eric to act like he was the one who did something wrong. Brooke thought this reunion seemed like another maneuver of Quinn’s, so Ridge suggested maybe they should start treating it like one.

Then, Justin entered right on time. Ridge needed what Justin promised since he was looking for loyalty and discretion. Justin assumed this was about going after Bill Spencer (Don Diamont), but Ridge said it was about his dad.

Ridge brought up Quinn and suggested he needed the guy who did all “Dollar Bill’s” dirty work – the guy who locked Thomas Forrester (Matthew Atkinson) in a cage like an animal and threw Ridge out of a helicopter.

Ridge ordered Justin to follow Quinn and make sure she was the loyal wife that Eric deserved. If Quinn wound up with Carter or did anything disrespectful of Eric, Ridge wanted to be notified. He urged Justin to explore every corner of Quinn’s life and felt she would never see Justin coming.

At the Forrester mansion, Eric knew immediately that Katie had come to check on him. He thought it was nice that Katie cared, but he insisted he was simply having a productive day working from home. Katie didn’t see Quinn at the office and was worried about Eric’s marriage.

Eric hinted about having an arrangement with Quinn, which Katie thought sounded rather business-like. Eric then suggested it was a poor choice of words and said it was an understanding. He acted like Quinn was younger and had many more chapters to write while he was working on his epilogue.

Katie didn’t like to hear Eric talking like that and wondered if Quinn made Eric happy. Eric eventually thought back to confessing his erectile dysfunction to Quinn before Katie once again pushed him to open up.