The Bold and the Beautiful Spoilers: Week of March 1 Preview – Zoe Goes All Out To Win Carter Back – Paris Supports Sister 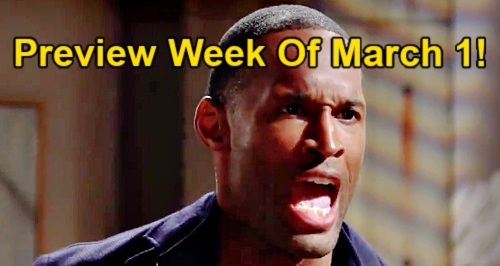 The Bold and the Beautiful (B&B) preview spoilers tease that Zoe Buckingham (Kiara Barnes) is going to have an uphill battle ahead of her during the week of March 1.

The new B&B preview video for the week is out, and it’s all about Zoe’s wholehearted attempt to win back Carter Walton (Lawrence Saint-Victor) and Carter’s serious resistance against that attempt.

The preview shows Carter and Zoe together at the loft, which make sense since B&B spoilers say that Zoe will set up a romantic scenario there for the two of them. Zoe will really be trying to prove to Carter that she’s serious about winning his trust back and that he’s the only man for her.

“I wanted a family with you, to take your hand and walk into the future together, to spend the rest of my life making you happy and you threw it away,” Carter fumes to Zoe in the preview. It certainly doesn’t look like Zoe’s loft surprise is going to go so well, if this is how Carter is reacting.

“i wouldn’t give up on Carter just yet,” Paris Buckingham (Diamond White) is shown telling her sister at Forrester Creations. Despite the difficulties between Zoe and Paris, it looks like Paris will offer her support and advice to Zoe.

Zoe then tells Paris that she’s more determined than ever to win Carter’s trust back.

Finally, the new B&B preview shows Zoe and Carter having another chat at Forrester Creations, and again the conversation looks very serious, with Carter resisting Zoe’s attempts to apologize.

We have to remember that Carter is very hurt, and that he’s a devoted guy who gives all of his heart, so for Zoe to have acted so cavalierly with Zende behind his back – well, it hurt Carter immensely.

“I broke your heart and I’m sorry,” Zoe says in the final scenes in the preview video. “And I’m asking – I’m begging – give us another chance.” One wonders exactly what Zoe’s going to have to do to get Carter to trust her again.

Zoe’s word just isn’t enough, not after she went behind Carter’s back and basically threw herself at Zende.

Perhaps Carter can talk things over with Ridge Forrester (Thorsten Kaye) this week and evaluate whether he wants to even consider giving Zoe a second chance. Of course, Ridge probably won’t want Carter to reconcile with Zoe – not after Ridge found Zoe and Zende together at the Forrester mansion!

We’ll see what ultimately happens this week, but the preview clearly indicates that all of Zoe’s begging and apologies aren’t really doing the trick where Carter’s forgiveness is concerned. Zoe may need another approach, or maybe she just needs to back off and give Carter some time to cool off a little.

Do you think that Zoe will ever win Carter back?

We’ll be sure to give you more updates as B&B news comes in. Stick with the CBS soap and don’t forget to check CDL often for the latest Bold and the Beautiful spoilers, daily episode recaps, and news.