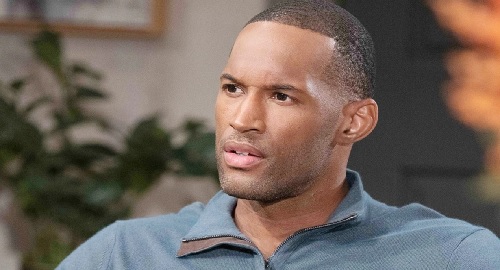 Carter’s love life has been a bit all over the place lately, but he’ll find clarity after he enjoys lunch at Ill Giardino with Paris Buckingham (Diamond White). Will Paris convince Carter to follow his heart and take the next step with Katie Logan (Heather Tom) or will Carter realize his feelings for Paris run deeper than he thought?

Either way, Carter’s set to have an epiphany and proceed from there. As for Finn, he’ll be catching up on some work in his office when Sheila enters and bares her soul. Sheila will be wearing scrubs either as a disguise or perhaps for a new position she’s started. Either way, Sheila will be sorry for her mistakes and will desperately want a new beginning.

Finn will be moved by Sheila’s desire to be in his life and will find it increasingly hard to keep his mom at a distance. Although Finn will want to respect the boundaries Steffy has put in place, he’ll also be drawn to his mother and may open his heart to Sheila just a crack.

Other B&B spoilers say Brooke Forrester (Katherine Kelly Lang) will land in the middle of Ridge Forrester’s (Thorsten Kaye) next round of Deacon Sharpe (Sean Kanan) hostility. Ridge will order Deacon out of the cabin, but Hope will argue that she wants her dad there.

Brooke will push Ridge to back off, so he’ll fume and march out the door to cool off. Once Ridge reins his temper in a bit, he’ll try to have a rational discussion with Brooke. Ridge will show off his protective side and insist he’s pushing so hard out of love, but Brooke may think this is more about jealousy and insecurities.

Back with Hope, she’ll settle on a pact with her father. Deacon will appreciate Hope’s willingness to give him a chance, so she may vow never to turn her back on him – just as long as he keeps looking to the future and proving he’s a better man.

Steffy and Liam Spencer (Scott Clifton) will team up to push Deacon as well as Sheila out of the picture for good, but Hope will overhear part of that conversation and lash out. She probably won’t think it’s right to lump Deacon in with Sheila as a threat to the children.

Regardless, Hope will stand against Steffy’s marriage interference, but Steffy will gladly fight for what she feels is right. As for Ridge, he’ll reach his max level of anger as Brooke makes a major decision that’ll affect their future.

It’s clear that Deacon is here to stay whether Ridge likes it or not, so Brooke may convey that and threaten to kick Ridge out if she has to! We’ll pass along updates as other B&B news comes in.