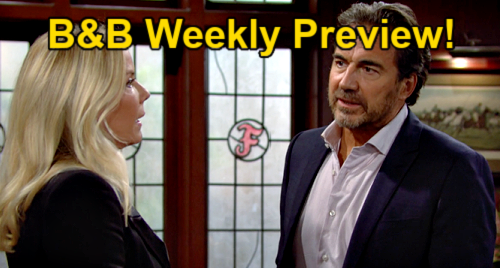 The Bold and the Beautiful spoilers preview for the week of November 8 to November 12 reveal that Hope Logan Spencer (Annika Noelle) will make progress with her mother. When Ridge Forrester (Thorsten Kaye) tries to kick out Deacon Sharpe (Sean Kanan), Brooke defends the con man. Brooke and Hope’s decisions will cause major chaos in both of their marriages, though.

B&B spoilers reveal that Ridge won’t be pleased to find Deacon inside his home. Ridge’s top priority is to protect his family. Ridge considers both Deacon and Sheila Carter (Kimberlin Brown) to be major threats, especially since they joined forces. In the weekly preview, Ridge demands that Deacon get thrown out.

While Hope stands beside Deacon, she appears to be taking a stand of defiance against Ridge. Deacon tries to explain that he just wants a relationship with Hope. Then, to Ridge’s surprise, Brooke defends Deacon.

This is quite the turnaround and Ridge thought that they were united in protecting their family. Ridge isn’t going to allow Deacon to affect his family, even when Brooke says that Hope wants her father to stay.

The question is how far will Ridge go to “save” his family? If he goes too far, it could mean the end of “Bridge” forever.

The Bold and the Beautiful spoilers reveal that the preview also shows Hope dropping a bombshell on Liam Spencer (Scott Clifton). Hope tells her husband that Deacon is going to be a part of their lives.

Not only does Hope want to have a relationship with her father, but she wants Beth Spencer (Madeline Valdez and River Davidson) to know their grandpa.

The Bold and the Beautiful Spoilers: Liam Spencer’s Rage

Liam is stunned at first, but like Ridge, he is determined to get rid of Deacon. Liam vows to do “whatever it takes” to protect Hope.

A sneak peek photo shows Liam flying into a rage. It is also confirmed that Ridge has a job for Justin Barber (Aaron D. Spears), which is directly connected to Deacon and Sheila.

Could Liam and Ridge go too far in their quest to protect the people they love? Could their actions end up driving both Hope and Brooke right into Deacon’s arms?

Will Deacon actually get the family he’s always wanted with Brooke and Hope? We will have to keep watching the CBS soap to find out!

Hope’s ready to give Deacon a second chance…but she might be the only one. See what happens next on all-new episodes of #BoldandBeautiful this week! Watch the latest episodes on @paramountplus. pic.twitter.com/vKmD0JGQlA