The Bold and the Beautiful Spoilers: Week of October 11 Preview – Liam Snaps at Deacon – Hope Fed Up With Bossy Husband 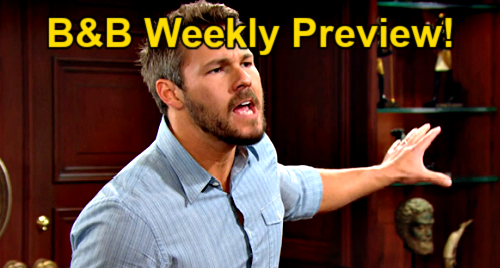 The Bold and the Beautiful spoilers reveal Sheila Carter (Kimberlin Brown) and Deacon Sharpe (Sean Kanan) plan on taking down the Forrester family. The B&B preview for the week of October 11 promises a lot of drama as Liam Spencer (Scott Clifton) explodes at Deacon while Hope Logan Spencer (Annika Noelle) looks fed up.

B&B spoilers reveal that Hope reunited with her father after his stint in prison. Hope knew that Deacon was on his way to her house, so she tried to prepare her loved ones.

However, Deacon walked in the door before Hope could warn Liam, Brooke Logan Forrester (Katherine Kelly Lang) and Ridge Forrester (Thorsten Kaye). Despite Hope’s best efforts, the reunion was tense and stressful.

Deacon decides to go see Hope at Forrester Creations no matter what anyone says. Not wanting to be blocked from seeing his daughter, Deacon goes undercover and sneaks into the building.

Even though Hope is glad to see Deacon, she doesn’t approve of him sneaking around in disguise. Hope tells Deacon that they need to handle this in the right way.

While the father and daughter are talking, Liam shows up and isn’t pleased to find Deacon there.

The situation gets tense when Deacon says that he is Hope’s father, indicating he has no intention of walking away.

Liam doesn’t take this well and comes unglued. Liam screams for Deacon to get out while Hope stands in the background.

The Bold and the Beautiful spoilers reveal that Hope is standing behind Deacon during the confrontation.

When Liam orders Deacon to leave, Hope crosses her arms and closes her eyes, as if she’s trying to stay calm. However, her frustration is clear as she doesn’t appreciate being treated like a child.

Hope probably isn’t going to be submissive about this situation. It is teased that Liam does not accept Hope’s decision to reconnect with Deacon.

After the confrontation, Liam might be surprised by Hope’s reaction. In her eyes, Liam is the villain and Deacon is not being given a chance to prove if he’s really changed or not.

The Bold and the Beautiful Spoilers: Forrester Takedown

Liam’s verbal explosion might anger Hope, but it’s exactly what Deacon and Sheila are counting on. The devious duo join forces so they can have relationships with their children.

At the same time, Sheila and Deacon plan on taking the Forrester family down. The preview features Sheila telling him that the Forresters aren’t going to know what hit them.

Just how far will they go to accomplish their goals? How will Hope feel when she learns about Deacon and Sheila’s scheme? How will the Forrester family fight back?

When they team up…it’s going DOWN! 💥 #BoldandBeautiful is new this week on @CBS! Watch the latest episodes on @paramountplus. pic.twitter.com/nDfS2tibTU