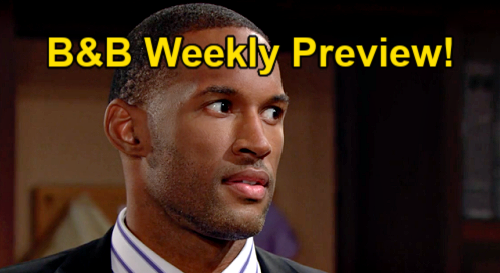 The Bold and the Beautiful spoilers reveal the preview for the week of September 13 will be a challenging one for Eric Forrester (John McCook). The patriarch suggested that since he can’t give Quinn Forrester (Rena Sofer) passion, she could get it from Carter Walton (Lawrence Saint-Victor). However, it gets complicated when Eric realizes that it’s not just physical for “Quarter.”

B&B spoilers reveal that Eric and Quinn are back together, but there are more issues than viewers realize. Eric has admitted to his wife the real reason he kept rejecting her. It wasn’t that he didn’t desire her, but that he was struggling with ED.

Quinn has accepted it and knows that when it comes to intimacy in her marriage, things will be different.

While Quinn accepts this new adjustment to their relationship, Eric refuses to sit by and do nothing. Eric feels that passion is just too important and Quinn must have it at any cost. So, without talking to her first, Eric comes up with an alternative arrangement.

Quinn and Carter have feelings for each other, that much is clear. Whether it’s love or just lust remains to be seen. Despite their feelings, Quinn is committed to Eric.

So, it’s a bit odd for Eric to invite Carter over and give them permission to hit the sheets. Quinn isn’t going to feel right getting frisky with Carter when her husband knows where she is and what she’s doing. It would be like Eric watching “Quarter” get down and dirty.

Carter also won’t feel comfortable with this arrangement. Despite the mistake of having an affair with the boss’s wife, Carter is a decent guy with a moral code.

Eric’s suggestion is going to make Carter feel awkward. So, Quinn and Carter probably will not go along with Eric’s arrangement.

The Bold and the Beautiful spoilers reveal that Quinn and Carter’s feelings for each other could complicate Eric’s marriage. Even though the two probably won’t do anything with Eric’s suggestion, yet, the feelings between the former lovers will be impossible to ignore.

In the preview, Eric is upset as he confronts Quinn and Carter about their feelings for each other.

The Bold and the Beautiful Spoilers: Confronting the Truth

Quinn desperately tries to assure Eric that she is committed to their marriage. However, that seemingly won’t matter to the patriarch. Quinn has already fallen in love with someone else and now that he knows this, Eric could make another drastic decision.

The Logan sisters are banding together to support Eric and Brooke Logan Forrester (Katherine Kelly Lang) will get mixed up in Quinn and Carter’s arrangement.

Meanwhile, Donna Logan (Jennifer Gareise) wants to know why Eric doesn’t love himself enough to walk away from Quinn. These elements, combined with Eric’s realization, could lead to the end of the “Queric” era and the beginning of a real love story for “Quarter.”

Things are getting very complicated for Carter and Quinn! 💔 Don’t miss what happens next on all-new episodes of #BoldandBeautiful on @CBS. Watch the latest episodes on @paramountplus. pic.twitter.com/AIqaX7GZTU