The Bold and the Beautiful Spoilers: Where Are Wyatt and Flo? 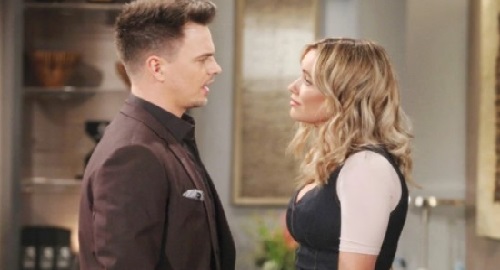 The Bold and the Beautiful spoilers document that Wyatt Spencer (Darin Brooks) and Flo Logan (Katrina Bowden) are missing. These likable characters have rarely been seen in recent months, which begs the next question.

When will Wyatt and Flo’s love story lead to marriage? So, the next logical step in this storyline would be to flesh out Flyatt’s, or Wo’s if one prefers, relationship.

It is understood that both actors have been working on other projects during their downtime. Hopefully, a new adventure is ahead for one of B&B’s best pairings.

This feels like ancient history but one of the more recent events involving Flo was when Sally Spectra (Courtney Hope) kidnapped her. As fans recall, Sally’s friend, Dr. Penny Escobar (Monica Ruiz), momentarily lost her mind and hit Flo over the head.

The above happened because Flo determined Sally was lying to Wyatt about having a terminal illness. Sally coerced Penny to go along with that scheme based on a promise to help the doctor make connections at Forrester Creations in an attempt to switch careers.

Flo eventually turned the tables and told Wyatt everything. Wyatt issued an ultimatum to Sally, telling her to leave him and Flo alone. He encouraged her to leave town, which opened the crossover door to The Young and the Restless for Hope’s character.

Brooks has been a great member of the cast since his debut in 2013. In addition to being a solid actor, the man has comedic chops.

Viewers recall his hilarious role-play scenes with Heather Tom (Katie Logan) during the Watie coupling. That pairing did not last, partially because Bill Spencer (Don Diamont) objected. Wyatt and Katie cared for each other, but Flo proved to be his soul mate.

Bowden lights up the screen. Flo is a pure delight, as is the extension of her backstory, Shauna Fulton (Denise Richards).

One way to bring Wyatt and Flo back would be to have their mothers renew their push for the wedding they’ve dreamed of since their children were in high school in Las Vegas, Nevada.

Jacqueline MacInnes Wood’s (Steffy Forrester) recent announcement of her expected third child could mean her character becomes pregnant again. Wood’s child is due in the spring. So, a projected second Sinn baby could become a topic sometime this winter.

But why not have Flo become B&B’s next expectant mother. Seeing Wyatt’s joy and all related baby preparations would certainly create soapy opportunities.

Wyatt and Flo have been ready to marry for more than a year. Hopefully, TPTB make that happen soon, with a Christmas engagement being ideal.